February 02, 2010
14 days of Romantic Transferware
I just adore this pattern, The Chatham,  by Royal Doulton.  The name Chatham translates to forest settlement and is a city which lies in the heart of the Medway, a gathering of towns along the Medway River in Kent, SE England.
The majority of pieces in The Chatham each have different scenes, mostly idyllic and including views in the background of the Medway river and the Royal Navy dockyard, which was opened during the reign of Henry VIII and closed in 1984.  The border of this pattern is light red/pink with tiny flowers, dots, and leaves.
Below is actually a two color transfer piece (we'll get into that later) where the center scene is a different color than the border.  In this case it is done in a charcoal color.  Furthermore it is handpainted over the transfer with various colors, all under glaze, called polychrome (I'll cover this later too!).  Circa 1902-1936 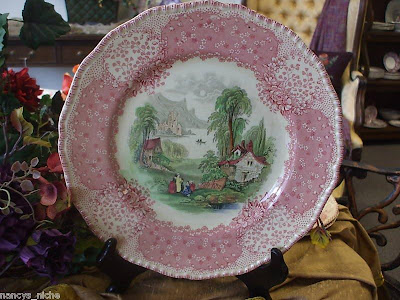 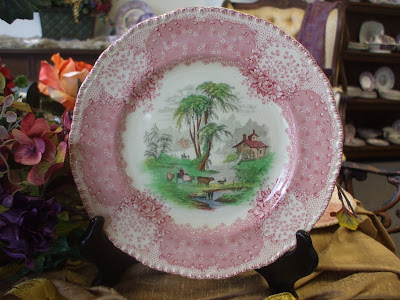 and here is a platter in this pattern done in two-color only: 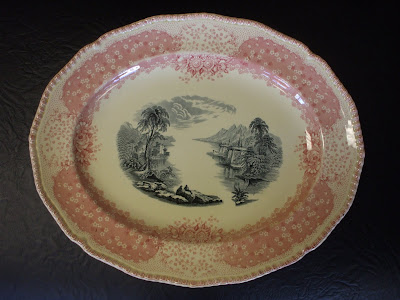 Below is the same platter with polychrome accents: 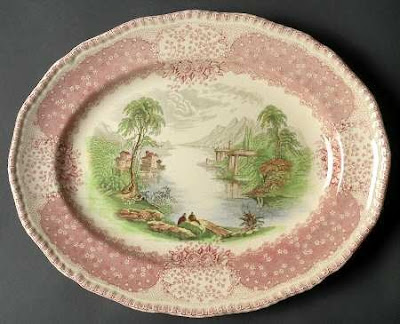 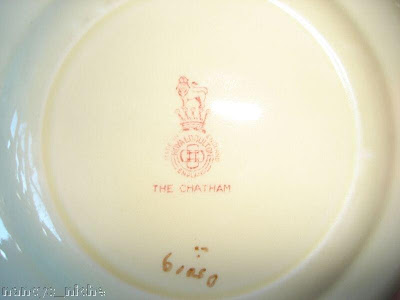 I have a few pieces of The Chatham pattern in my office, opposite my desk, where I've mixed them with some deeper red pieces: (my talented Mom painted the painting in the center, above the sofa =) 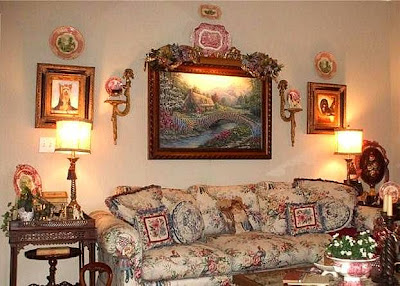 A bit about Royal Doulton:

Renowned as one of the worlds finest producers of tableware, Royal Doulton has a rich history which dates back to 1815 in Lambeth, South London where John Doulton and his partner John Watts established their pottery.
In 1882, Doulton purchased a small factory called Pinder, Bourne & Co, at Nile Street in Burslem, Staffordshire; part of The Potteries, where the Royal Doulton companies reputation flourished.   Tablewares and Art Pottery were being produced alongside industrial ceramics. Also, by 1882, this branch of Doulton's operation was making bone china (porcelain containing bone ash).

Developed by his son Henry Doulton, it became Britain's leading manufacturer of sanitary wares and other industrial ceramics as well as a major producer of art pottery and of ornamental and commemorative pieces, and tablewares.

The Lambeth Studio in London continued in existence until 1956, and until recent years the  Doulton production has been concentrated at Burslem.
Having taken over many of its rivals both in industrial and decorative wares, the Royal Doulton Group was one of the largest manufacturers of ceramics in Britain.


One of the blogs I follow, http://www.jeannebenedict.com/blog.html offered this pink fudge recipe recently...perfect for a homemade Valentines Day candy!  She's got tons of creative and fun recipes...even for today...Groundhogs Day cookie cupcakes! Pink Pecan Fudge (Wouldn't this be lovely served on a red transferware plate?)


Place sugar, evaporated milk, and salt in a medium heavy bottom saucepan. Bring to a boil over medium heat and cook for about 10 minutes, stirring occasionally. Remove from heat and immediately pour over chips and butter in mixing bowl. Beat mixture on a low speed for 5 minutes and then increase speed to high for another 5 minutes. Stir in pecans and pour candy into buttered pan. Chill until set and then cut into small squares.
Makes about 2 lbs.

Because you love me I can choose
To look through your dear eyes and see
Beyond the beautify of the Now
Far onward to Eternity.