There is a wonderful, online exhibit I want to share with those of you who are transferware enthusiasts, like me.  Winterthur, the Transferware Collectors Club, and Historic New England have joined forces to develop this exhibition. It is called Patriotic America and offers a very comprehensive set of images of blue printed pottery with American depictions during the 1820's, which documents a great time of celebration in the country.
Historical transferware is probably the most seriously collected and most expensive of transferware.

From Winterthur:
"In 1815, when trade between America and England resumed following the War of 1812, Staffordshire potters were eager to regain access to one of their most lucrative markets.
This virtual exhibition brings together the production of more than twelve British potters who created an aesthetic that would be desirable to Americans eager to purchase objects highlighting their growing nation.
Many of the images were inspired by paintings and engravings depicting the new nation's remarkable landscape and notable architecture.  Succeeding generations have treasured these wares, and they survive as a testament to the skills of the Staffordshire potter and the patriotism of his American consumer."

You can view the exhibit here: 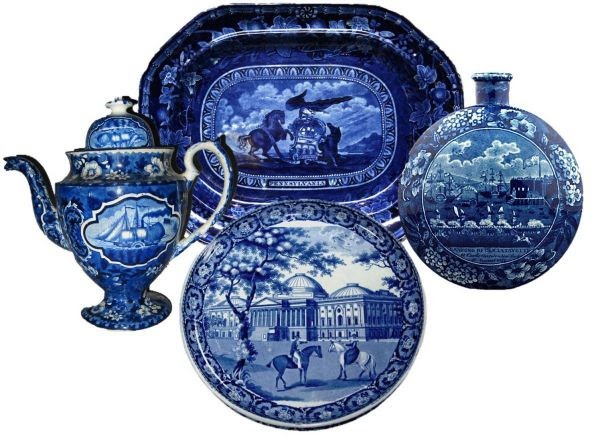