These adorably stout little guys are called Tobies.  A Toby is a figural ceramic / earthenware piece, often a pitcher or jug, moulded into the form of a popular character.  Often, these characters are historical in nature, such as Winston Churchill, but the original Tobies date back to the 1760's shortly after the invention of transferware and were made in the form of jovial, stout men dressed in clothing of the period: knee length breaches, waistcoat, tricorn hat, frock coat, neckerchief and black buckle shoes, often seated, puffing away on a pipe and almost always clutching onto a pitcher or jug of frothy ale. 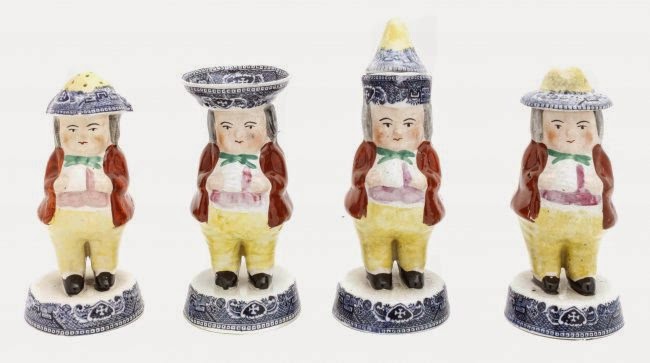 These cruet sets are most often attributed to one of the potteries in the town of Prestonpans, east of Edinburgh, in Scotland.   This was an an ideal location for the development of potteries as early as the 17th century due to the ample supplies of coal and clay that were easily transported by sea to the south side of the Firth of Forth,  These Tobies are sometimes referred to simply as Prestonpans, dating back to the early 19th century and included figures for salt, mustard, vinegar and pepper.  They were made in other areas including Staffordshire, many by Royal Doulton and Spode, where other versions were produced. 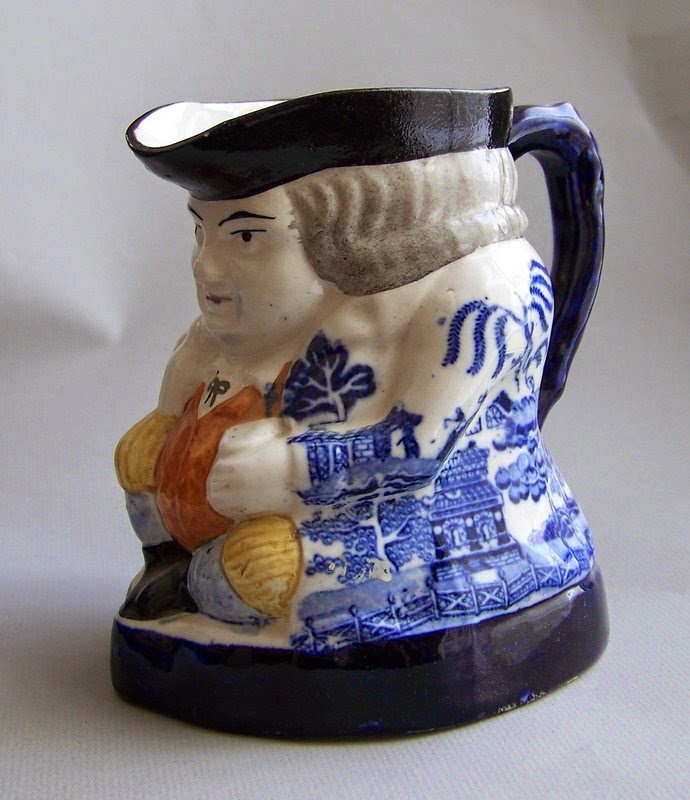 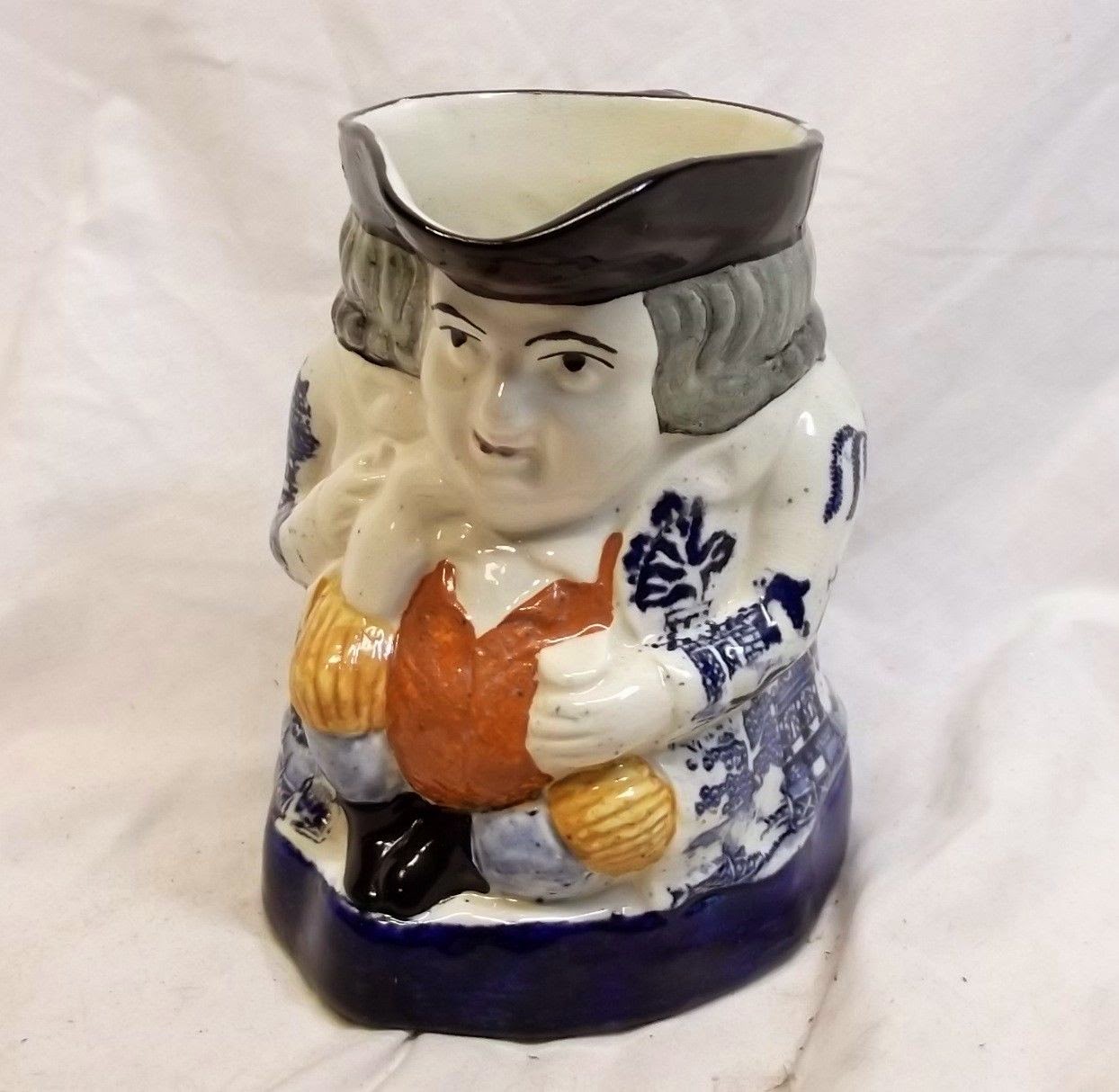 Each of the portly figures I'm featuring all have some area of blue transfer printed headgear, coats or bases and are attributed to Prestonpans, though many English potters made Tobies in other forms, such as Whieldon, Ralph Wood, Spode and Royal Doulton though most, if not all, do not feature the transfer printed areas on them which I think makes these so unique and interesting. 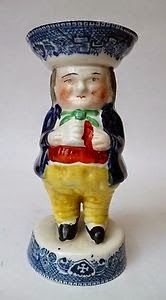 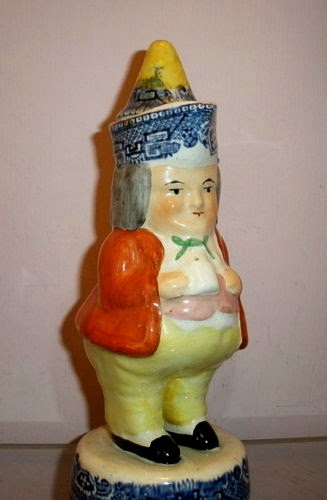 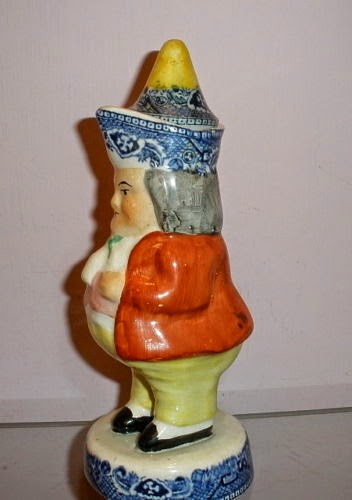 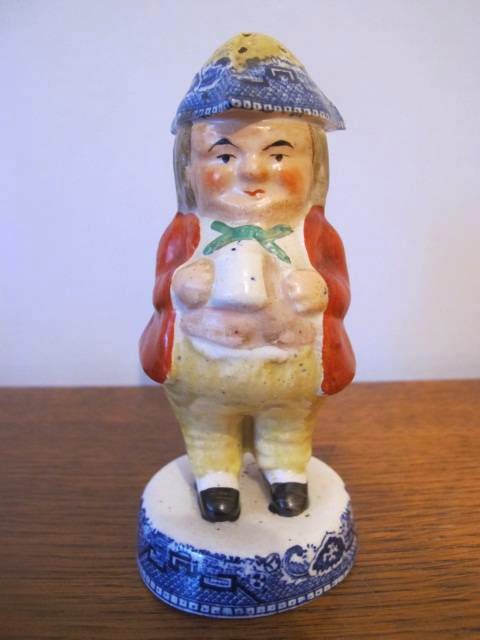 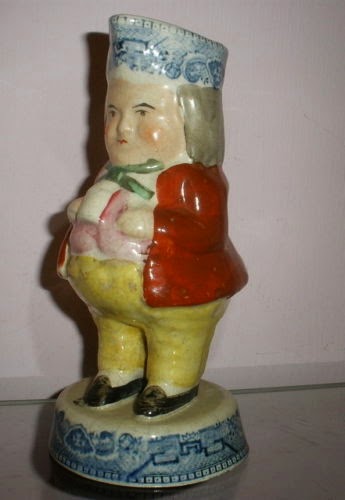 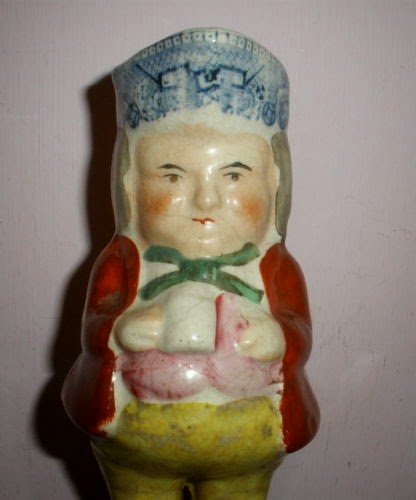 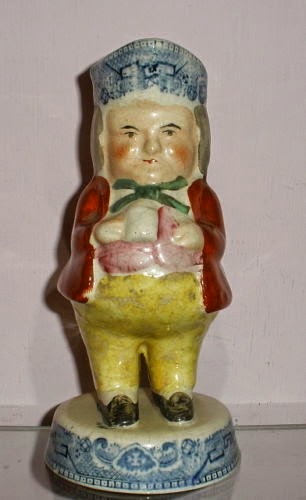 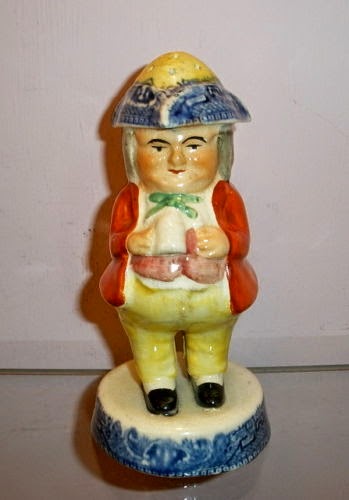 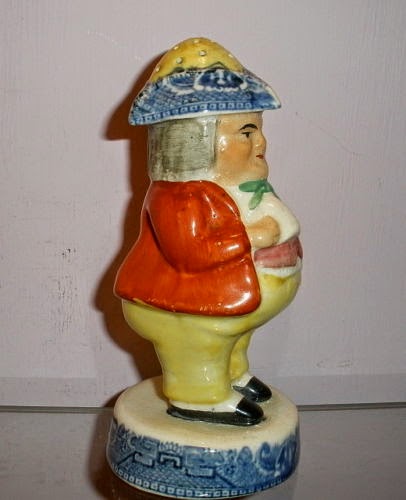 Many collectors and historians have competing theories as to where the name Toby Jug comes from. Some say they are named after Sir Toby Belch, a character in Shakespeare's Twelfth Night play.   "Tope" is a French word meaning to drink hard (a Tope, Toper, or Toby).  However most speculate that Tobies were named after Henry Elwes, aka as Toby Fillpot (or Philpot), renowned for his drinking prowess, and inspired by an old English drinking song, "The Brown Jug" which paid tribute to Toby Fillpot whose ashes were made into a Toby jug. 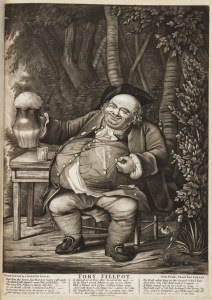 Dear Tom, this brown jug that now foams with mild ale-
In which I will drink to sweet Nan of the vale-
Was once Toby Fillpot, a thirsty old soul,
As e'er drank a bottle, or fathomed a bowl;
In bousing about 'twas his praise to excel,
And among jolly topers he bore off the bell.

It chanced as in dog-days he sat at his case,
In his flower-woven arbour, as gay as you please,
With a friend and a pipe puffing sorrows away,
And with honest old stingo was soaking his clay,
His breath-doors of life on a sudden were shut,
And he died full as big as a Dorchester butt.

His body when long in the ground it had lain,
And time into clay had resolved it again,
A Potter found out in its covert so sang,
And with part of fat Toby he formed this brown jug,
Now sacred to friendship and mirth, and mild ale,
So here's to my lovely sweet Nan of the vale!
~Frances Fawkes, 1761~

Below; a very rare set of four Prestonpans toby cruets, comprising a salt with a fixed dished circular hat as the bowl, a pepper pot with a fixed pierced tricorn hat, a vinegar jar with detachable conical hat and a mustard pot with a detachable hat, each with crimson coat, green tie, yellow breeches and black shoes, within transfer printed blue and white borders, 5 1/4" - 6 1/4" high

This set below sold on Atlas Antiques for about $5000 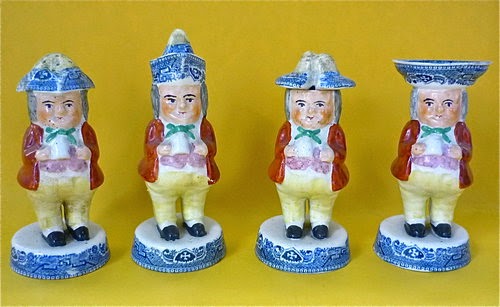 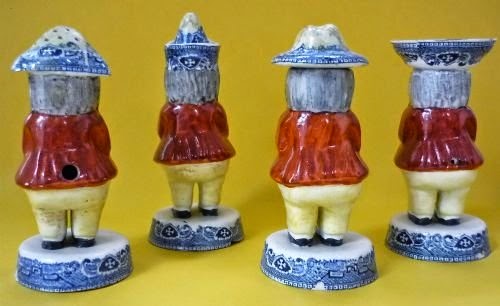 As cute as they are, they are valuable and probably not something I'll see in my collection any time soon!  Some of the sets still intact are housed in museums.

Joining some of these wonderful blogland parties and hosts: