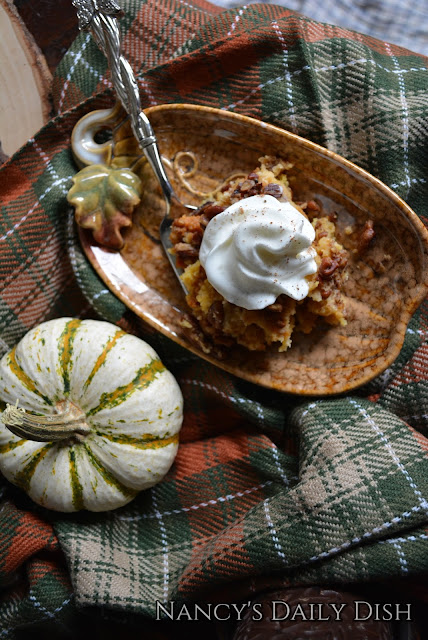 I wake up during the night quite a bit, and after rolling around for 15 or so minutes trying to get back to sleep I usually give in,
reach to the bedside, pull my phone off the charger and begin catching up on the news, looking up information on lots of things I'm interested in, catch up on one or all of the several games of 'Words' my Dad and I have had ongoing for months and read emails. Or I look at food.   A few nights ago I wound up reading recipes and bookmarked 5 pumpkin recipes I hope to try this season.   I've now got one down, four to go and I hope the others live up to being as good as this one did! 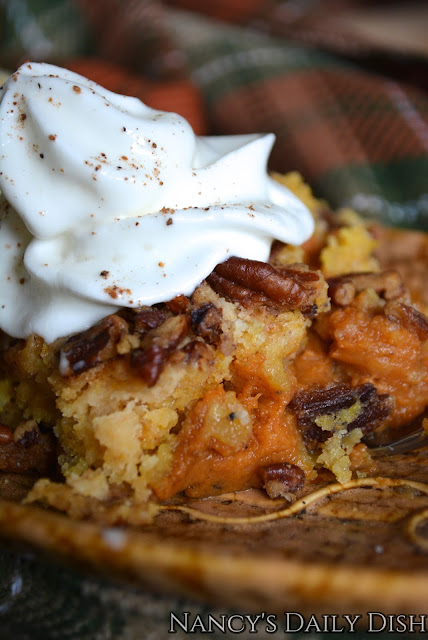 It's a keeper, winner,  gonna make it again soon - like this weekend soon (for my own birthday lol) and maybe for Thanksgiving too.  It's that good!  And, it's super easy.  It is a simple concoction of  creamy spiced pumpkin, butter crumb topping and crunchy pecans. 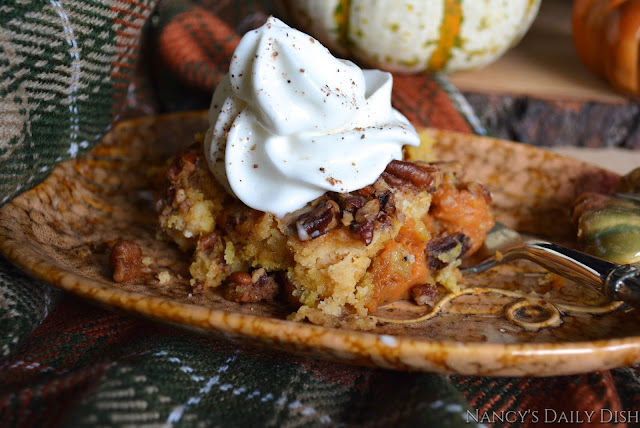 I found the recipe on Southern Living (by the way, you might check out the upcoming November issue…I think I'm going to be in it because they interviewed me this summer about turkey transfer ware), and their introduction to the recipe noted that one of the food staffers there ate half the pan.  Some of us at my house can relate to that.  I pulled this wonderful dessert out of the oven last night at around 9:00.  This morning when I got up it was more than half way devoured.  There's not much left now and it's still less than 24 hours after it was made. Five of my family members have tried it and each of us give it two thumbs up, even Trev who is the pumpkin fanatic in the family. 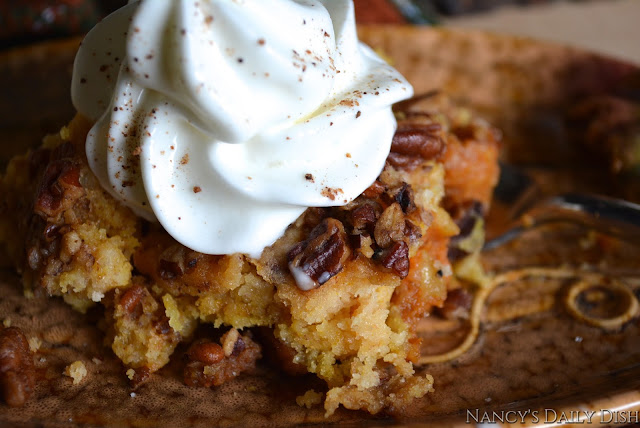 1 15 ounce can pumpkin (not pumpkin pie filling)
1 cup evaporated milk
1 cup sugar
1 teaspoon vanilla extract
1/2 teaspoon cinnamon (I probably used a tad more than this)
*1/2 egg, optional.  When I made this I chose to add 1/2 an egg to the pumpkin mixture after reading reviews that mentioned the pumpkin was runny.  With the addition of the egg I did not have this problem and yet it was still very creamy and held together.  I will do this again when I make it, which I absolutely will.
1 box moist yellow cake mix
1 cup chopped pecans (I probably used 1 1/2 cups)
1 cup melted butter, unsalted
Whipped cream or vanilla ice cream (we think ice cream is better with it)
Sprinkle of nutmeg

Stir first 5 ingredients (6 if you opt to use the egg).  Pour into a lightly greased appx 13 x 9 baking dish.  Sprinkle cake mix evenly on top of pumpkin mixture, then sprinkle with pecans. Drizzle the butter as evenly as possible over the top.

Bake at 350 for an hour to one hour and five minutes.  Remove from oven and let it stand for 10 minutes before serving, if you can stand it.  We couldn't. We dove in. But, having now eaten it piping hot and at room temperature, I think I may like it at room temperature better because the crust on top cooled and became crisper.  Serve it with a ginormous dollup of whipped cream or a chunk of vanilla ice cream and garnish with a sprinkle of nutmeg, cinnamon or pumpkin pie spice. 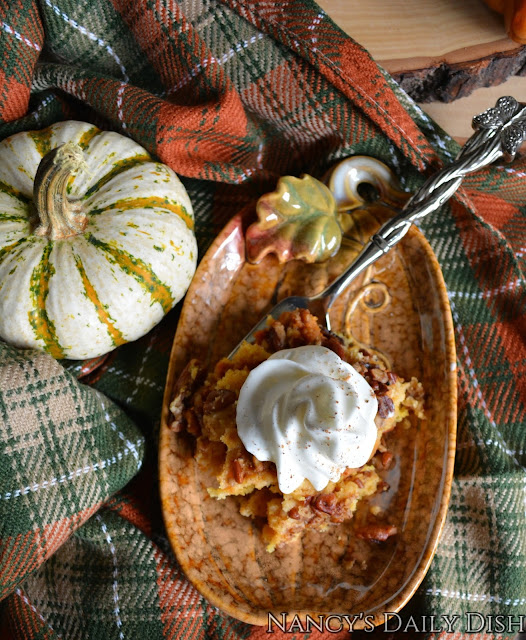 Try it, I am pretty sure you will love it! 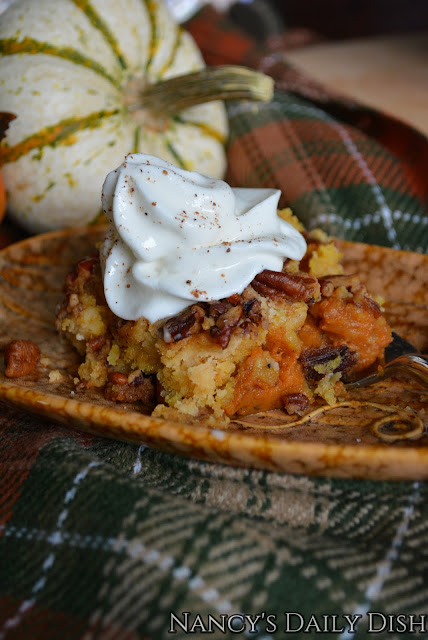