September 28, 2015
Shawn and I have been married for 29 years!  How many 47 year olds can say that?   We didn't make a big to do out of celebrating, but instead we chose to have a relaxing weekend free of work.  I stayed off the computer all weekend (well, for the most part!) and we leisured about, ate out a few times and spent Friday and Saturday antiquing at some of our favorite antique shops and malls in small towns around Tulsa.   When I say antiquing, I really mean I bought stuff to resale!  =)   I can't help it.  I find things that I love but I really don't need to add one more thing to my own collections so instead I buy them for those of you who like what I like.   Sometimes though, I keep some of the pieces in the house until they sell.  This Herme's plate is one such find. 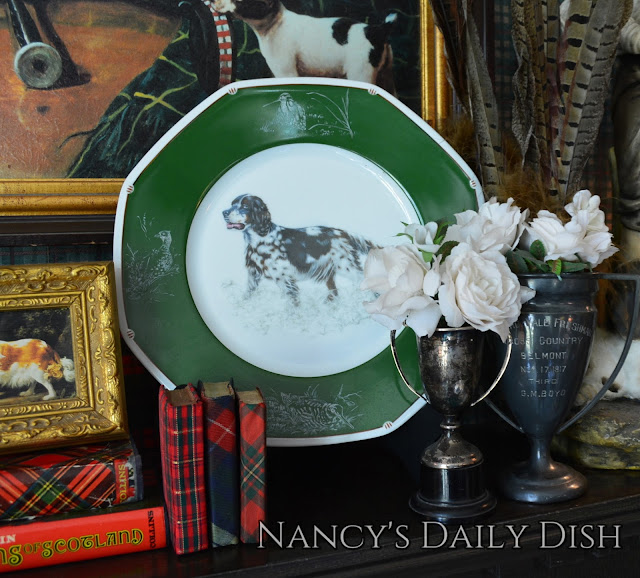 I spotted this as I was looking at a single piece of purple transferware I'd eyed from a couple of booths away!  I bought the purple piece too, in case you're wondering.  It's a cigar ashtray made by Clarice Cliff in the Tonquin pattern.  They are hard to find!  It is listed for sale in my shop, as is the English Setter Hermes plate which I'm looking at as I type and keep thinking to myself how nice it looks in here. 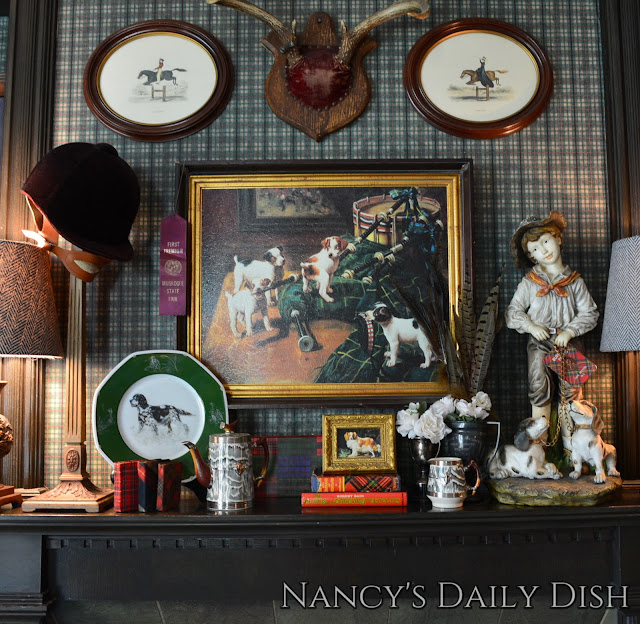 Don't laugh, but do you see the very faded  blue ribbon hanging from the picture? 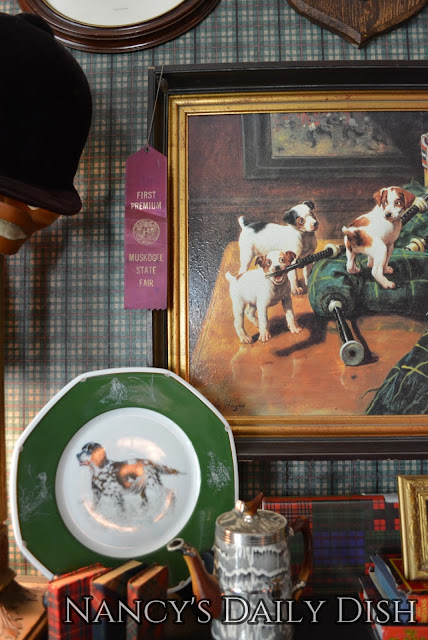 It's one that I won at the State Fair in, I think, 3rd grade for some of my art work.  Somehow I managed to salvage the ribbon but the artwork is nowhere to be found.  I thought the ribbon would make a nice substitute for a horse ribbon since I've got a bit of an Equestrian theme going on in here.  I know, I know.  I'm such a dork. 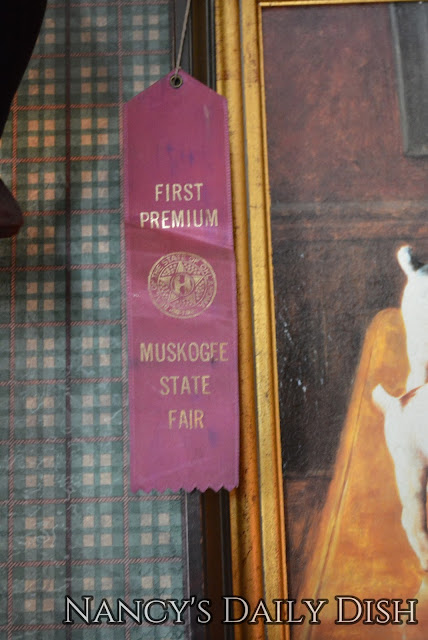 But, honestly the main reason I'm writing this post is because, as I usually do, I enjoyed putting a vignette together in my office and thought that you all might like to see it to.   It's a small vignette on the mantle and it encompasses not only the plate, but these teeny tiny tartan cloth covered books as well, which I am crazy about.  Did you notice them?  I bet if you are Alison from The Polo House you did. 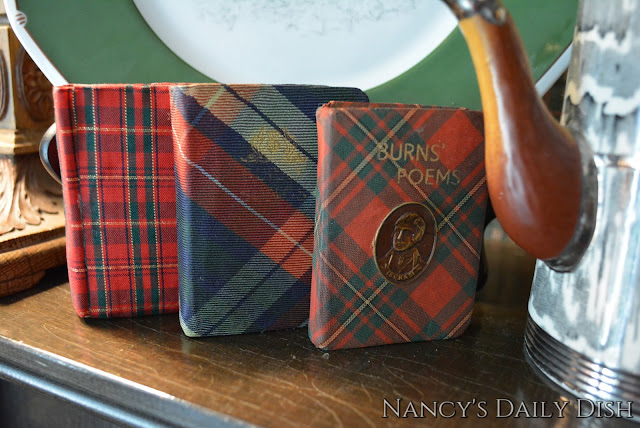 They are miniature or pocket books, sometimes called midget books and have cloth coverings in a plethora of tartans and plaids. As you can see, I have a few of these books.   Most of the ones I own are Poetry books dating to the late 19th / early 20th century.  There are a number of books from the Thistle Library containing works from Scottish writers like Robert Burns and Sir Walter Scott. 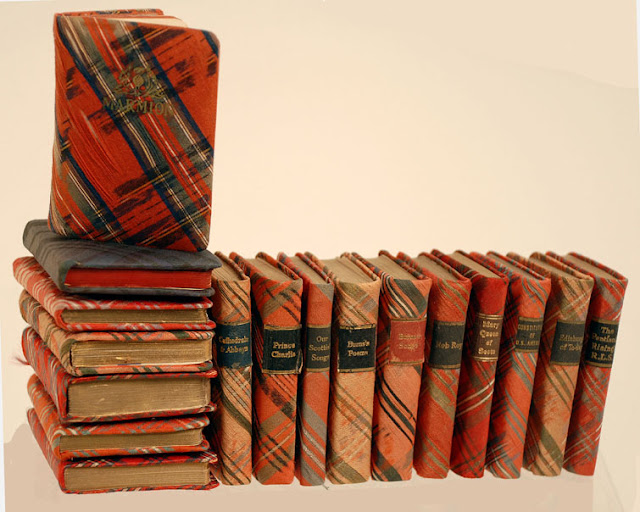 This collection sold for $650 on Live Auctioneers.  Most of the value is in the Mauchline ware box but it isn't uncommon for these little books themselves to bring $25-40 a piece. 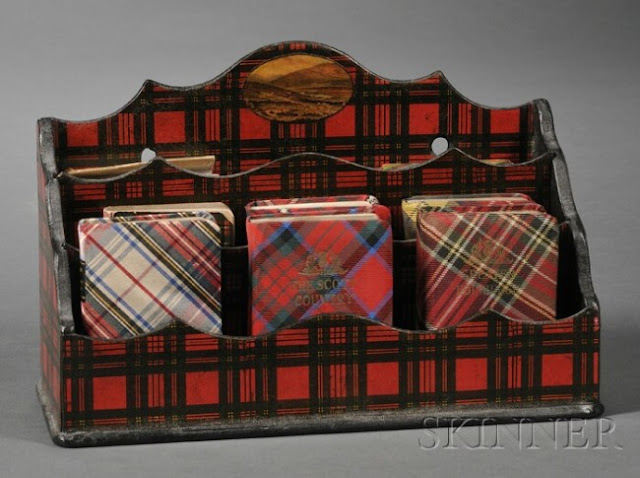 (source: Live Auctioneers)
I'm really not changing the subject, but…
I have a nice sized figurine of a boy and his dogs.  I keep it on the mantle in my office almost all the time but sometimes he works his way into tablescapes as you can see below when I placed him amongst a pumpkin patch in a Spode Byron tablesetting I did a few years ago. 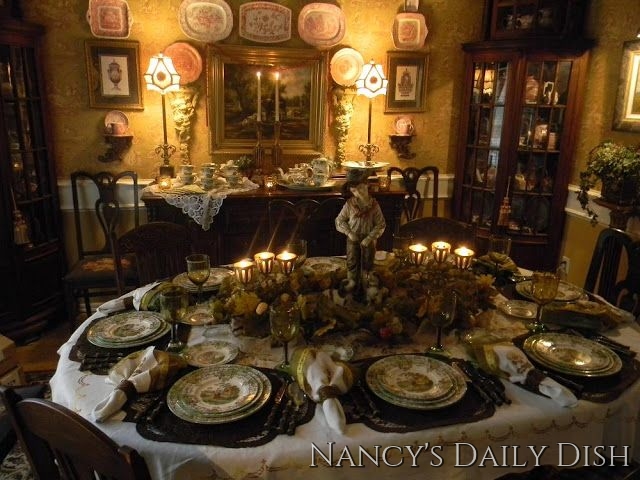 When I got my first miniature tartan covered book I wanted to display it, but where?  Sometimes I will walk around the house, room to room, with a tiny little thing like this pondering about how to display it.  As I did this, it struck me.  I'm gonna wedge that sucker into that boys hand if it kills me because that's where it is going to look perfect! 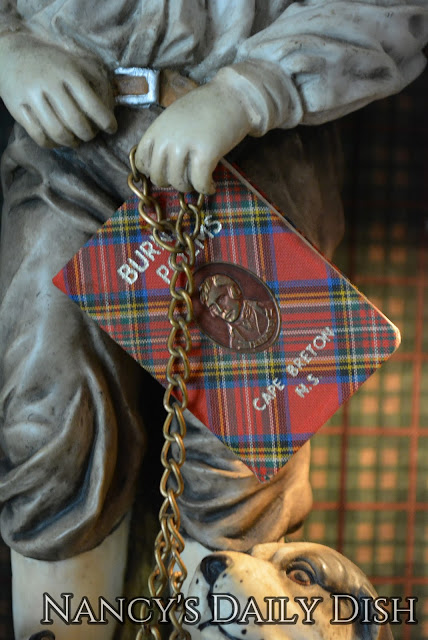 And, I do think it looks perfect.  He looks like he's taking a walk with his dogs and contemplating where he's going to stop along the way to read his book that he's brought along, maybe in the shade of an old Oak tree. 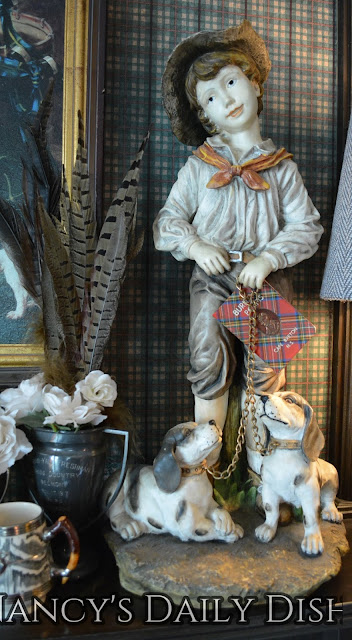 I love to decorate with plaid and tartan any time of the year but is there a better time to do so than in the season now upon us? 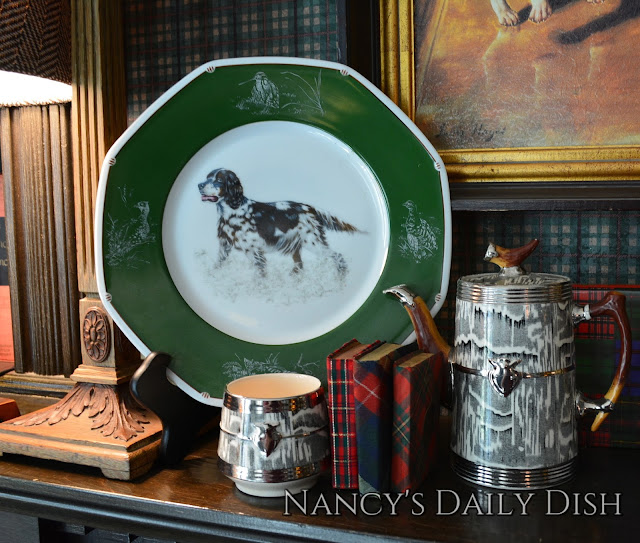 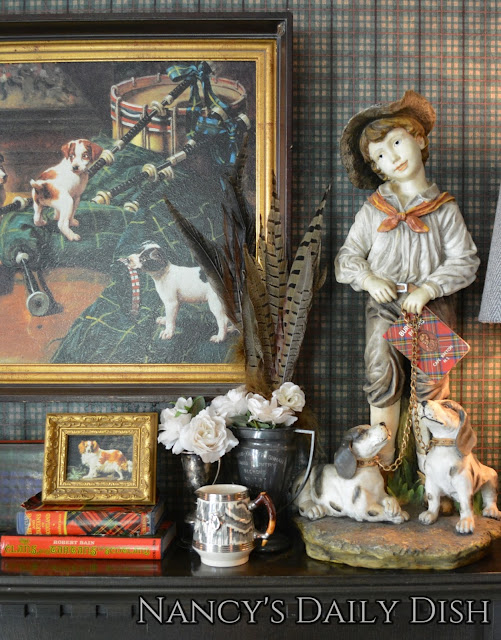