April 05, 2016
If you are of Scottish ancestry, as were half of the signers of the Declaration of Independence, simply a lover all things tartan, or as I am; are both,  then it's time to get your tartan on!

I've put together a tartan vignette on the entry table. 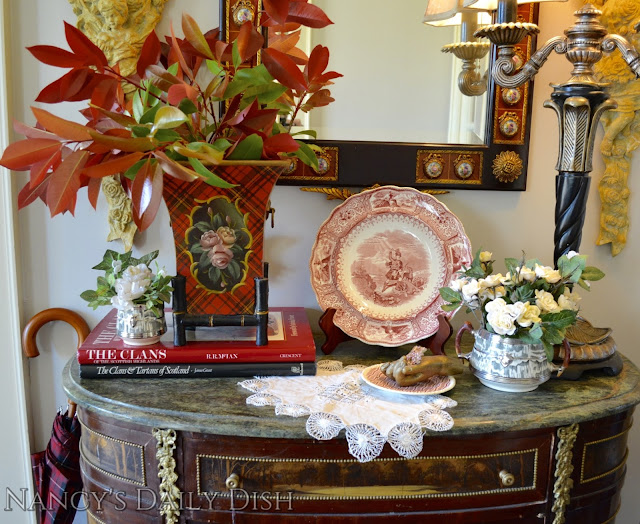 Let's take a closer look, shall we?   This red tartan tole planter has black bamboo legs and hand painted roses with gold accents.   I found this on one of our antique jaunts a few months back- and though I bought it to resale, I think I'm going to have to enjoy it at my house a little before I put it in the shop.  When you are on the low budget plan as I am, there isn't much money for fresh flowers...so... the next best thing is to run outside with scissors and clip some fresh greenery from a bush!  The new Spring growth is a lovely shade of red and looks nice with the tartan planter.  A couple of Scottish clan books set underneath gives a little height to help balance with the large lamp on the opposite side of the table. 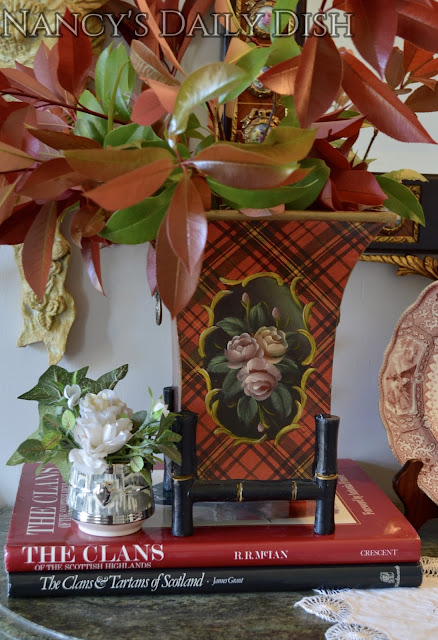 I have a thing with hand shaped objects as well (my logo might come to mind).  There is something so feminine and delicate with the hand pieces I have.  They make me think of small offerings.  This little hand holds a brooch inherited from Shawn's Grandmother and sits on an antique transferware plate in a wavy tartan by Spode. 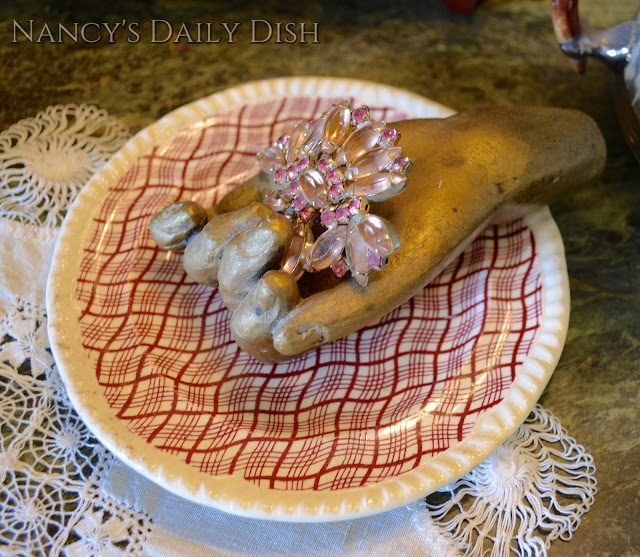 Now, I may not like tartan quite as much as transferware but it definitely ranks very high on my list of interior (and fashion) loves!  This transferware plate represents them both. 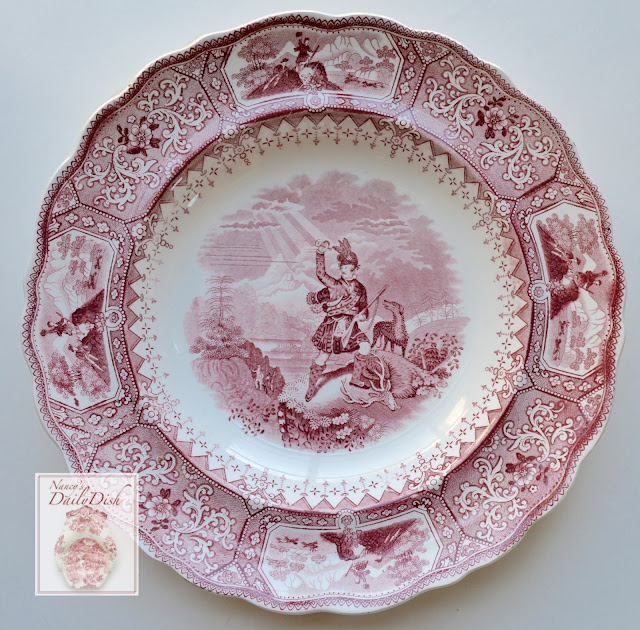 It dates to 1830 - 40 and was made by Adams.  The Adams' family potteries can be traced to as early as 1447!  Officially, they were established in 1657 and rose to great prominence during the 18th century as Master Potters in Burslem and other parts of the North Staffordshire area.  As pioneers of the trade, the earliest generations of the Adams family helped pave the way for some of the worlds best known potters such as Thomas Wieldon, Josiah Wedgwood, Josiah Spode, Thomas Minton and more of the well known Adams family of potters.   They worked side by side with many potters' families, including the Wedgwoods, and intermarried with many of them. 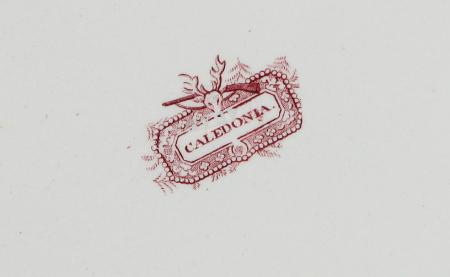 The pattern on this piece is called Caledonia (Scotland).   Caledonia is the Latin name given to the land in today's Scotland, by the Romans.  This pattern depicts Scottish highlanders in full, ancient kilt dress engaged in stag hunting. 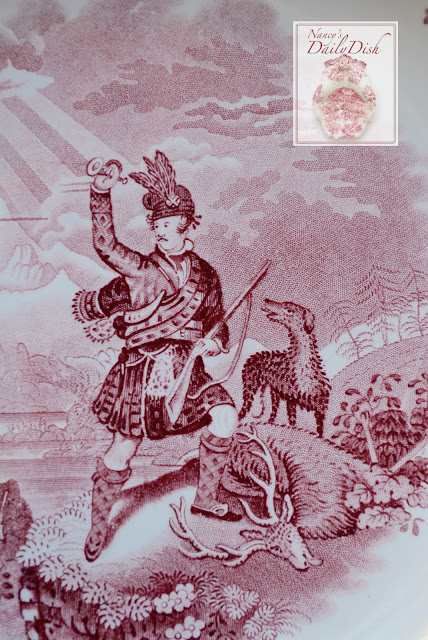 Each of the pieces shows a similar stag hunt scene.  Caledonia was produced in blue, brown, purple, red and sometimes in a two color transfer, as shown below on this platter and large pitcher. 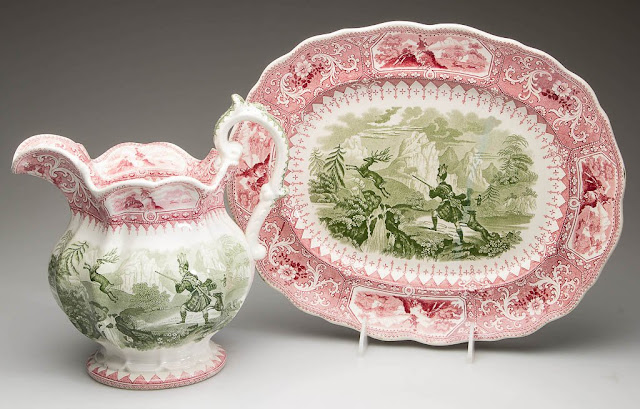 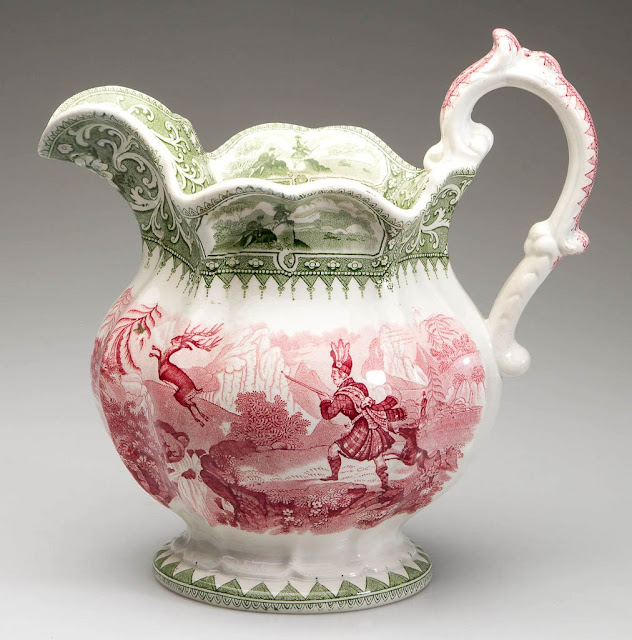 Did you know there was a National Tartan Day or what it was all about?  Will you celebrate?  I'd love to know! 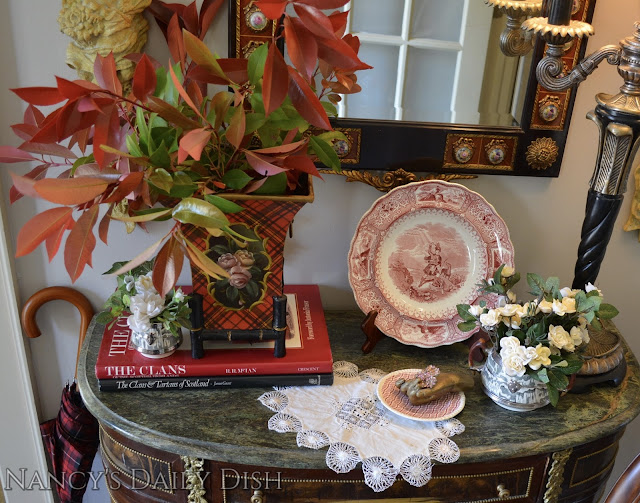 I'm signing off with a view looking into the dining room and a sneak peek of my Tartan tablescape... 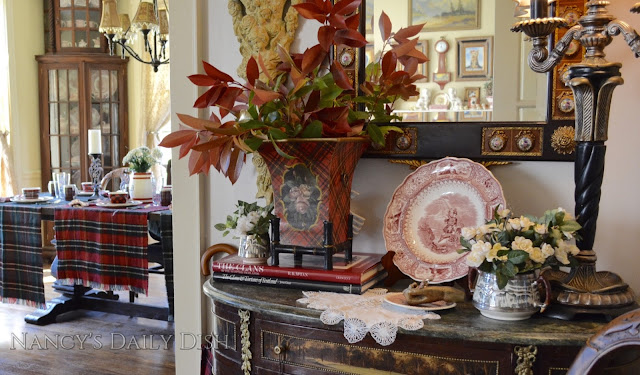 For as long as but a hundred of us remain alive, never will we on any conditions be brought under English rule.  It is not for glory, nor riches, nor honours that we are fighting, but for freedom---for that alone, which no honest man gives up but with life itself.
~From The Declaration of Arbroath 1320~