A favorite amongst collectors and the era of romantic Staffordshire

February 07, 2010
As my husband prepares some Super Bowl Sunday snacks (which I am happy to sample along the way)  and updates his twitter posts, I am at my desk doing some research on Ralph Stevenson and in particular, the MILLENIUM pattern which is highly sought by serious and avid collectors of transferware.
This is a rare and wonderful early transferware plate in the iconic MILLENIUM pattern. It was made by Ralph Stevenson, circa 1832-35. Marked with the pattern name "Millenium" (a misspelling of the word Millennium).  Despite the fact that my plate has a small chip (at about 5:00), it still is both valuable and collectible.  It remains one of my favorite pieces of transferware I own. 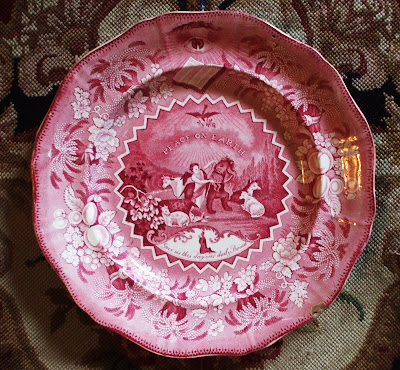 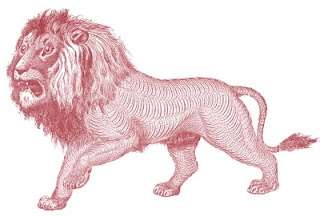 The top of the plate shows the all seeing eye of God and the bible opened to the book of Isaiah. 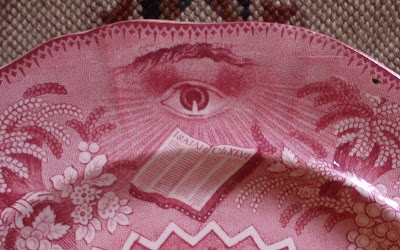 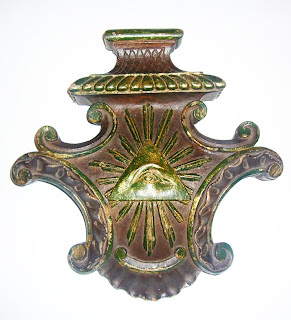 The center of the plate shows a child embracing a lion, with domestic animals including a lamb and cow,  and various beasts of the wild.  Above the image, the caption "Peace on Earth" is seen as a dove carrying an olive branch flies above, through rays emanating from heaven.    "Give Us This Day Our Daily Bread" is under the image with a small depciton of a praying man. 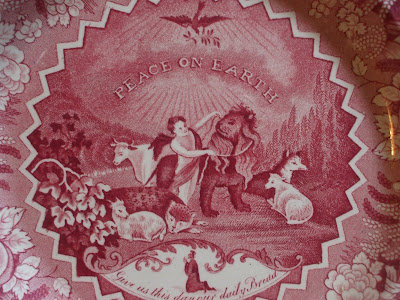 The stippled border of the plate is decorated with fruits, flowers, and grain producing plants. 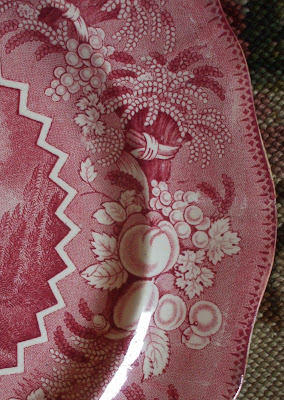 The backstamp is a cartouche which reads Millenium (misspelled). 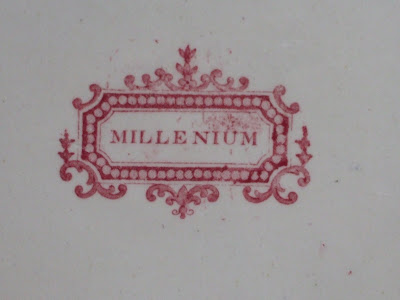 The plate holds a particular sentiment to me and many collectors.  The detailed imagery is simply stunning.
I have my plate displayed in an arrangement of red transferware on my dining room wall as shown below: 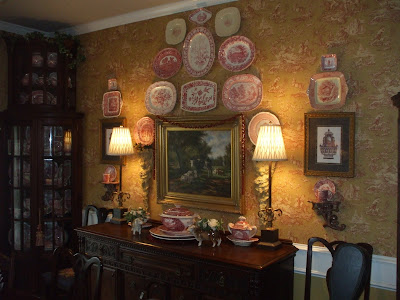 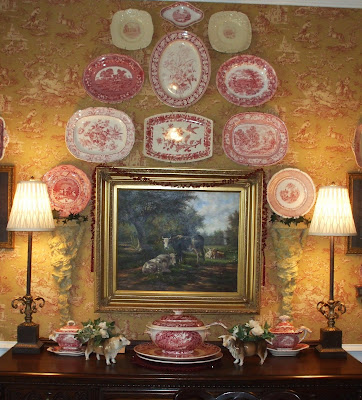 The Millenium pattern can be found in other colors:  purple, blue and brown:
Purple Platter: 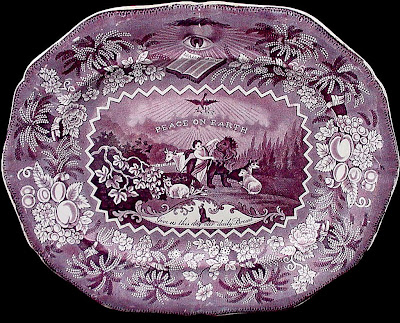 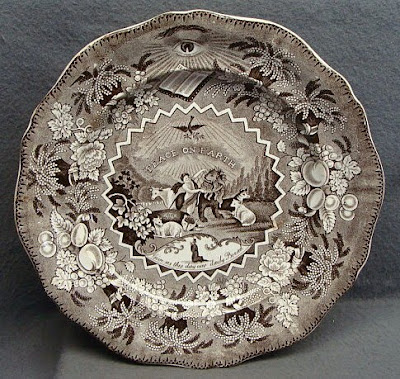 A bit of information on Ralph Stevenson:

Ralph Stevenson, the son of Ralph and Ann Stevenson, was baptised, probably at Burslem, on 28 January 1776. Between 1784-1800 he lived in Scotland with an uncle, John Adams, then returned to Cobridge where established a business as an earthenware pottery manufacturer.  He went bankrupt in 1835.

Ralph Stevenson married Mary Nee Mayer  on  August 31, 1807 and together they had two sons, Ralph Stevenson and John Adams Stevenson, both of whom became solicitors and clerks to Hanley and Stoke councils respectively.
He was involved in the establishment of the Potteries Mechanics' Institution in 1826. From about 1803 to 1818 he lived at Cobridge Cottage, situated off Elder Road, in the area of the later Grange Street where the poet Thomas Campbell visited him in 1805, remarking on the poor road conditions.  His house later became a convent, then the home of Samuel Alcock (another potter) and was demolished in 1913.

Ralph Stevenson died in Sandon in 1853.
Freedom And Love

How delicious is the winning
Of a kiss at love's beginning,
When two mutual hearts are sighing
For the knot there's no untying!
Yet remember, 'Midst our wooing,
Love has bliss, but Love has ruing;
Other smiles may make you fickle,
Tears for other charms may trickle.
Love he comes, and Love he tarries,
Just as fate or fancy carries;
Longest stays, when sorest chidden;
Laughs and flies, when press'd and bidden.
Bind the sea to slumber stilly,
Bind its odour to the lily,
Bind the aspen ne'er to quiver,
Then bind Love to last for ever.
Love's a fire that needs renewal
Of fresh beauty for its fuel:
Love's wing moults when caged and captured,
Only free, he soars enraptured.
Can you keep the bee from ranging
Or the ringdove's neck from changing?
No! nor fetter'd Love from dying
In the knot there's no untying.

Thomas Campbell ~ Glasgow, Scotland 1777-1844 (the visitor mentioned in article on Ralph Stevenson above)