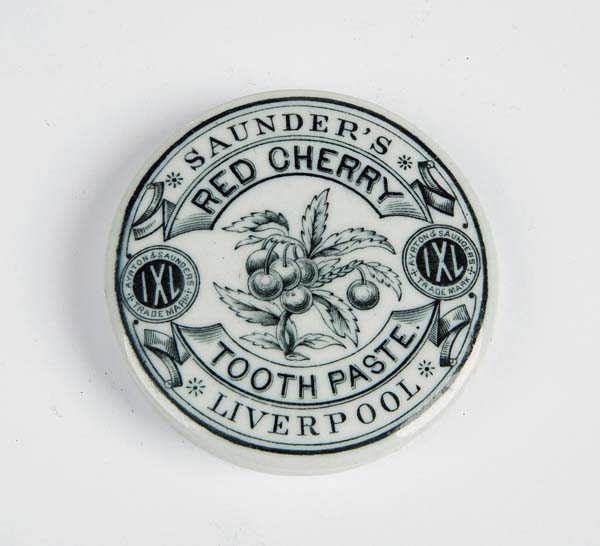 Pot lids are the lids or covers of small pottery jars which were used to hold a variety of products.  Often, they were decorated using the transfer printing process, and though quite laborious by today's standards, it was much faster than the previous method of hand lettering  or pasting a hand written paper label on the sides of the pots (jars) to describe the contents within.
These enchanting little transfer printed pottery jars were produced mainly between 1840-1910, after which they became obsolete, due to less expensive, mass marketing methods using tubes and plastics.  During the era of pot lids, containers in all different shapes, though mainly round, and with all kinds of advertising and graphics, as well as pictorial images, to increase public appeal were made. The marketed products were substances which came in a paste or hardened cake form. The gamut of products sold in the little jars consists of facial cold creams, shaving cream, ointments believed to have medicinal value, cosmetics, toothpaste, and even edible products such as anchovy paste. 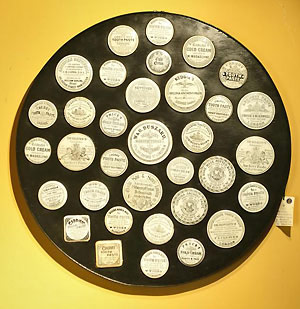 I'll show some of the other types of lids later, but for now let's take a look at toothpaste pot lids.

Toothpaste and tooth powders first appeared in transfer printed pots in the 1860's. By the 1880's many chemists were making their own toothpastes, packaged in their own printed jars, or pots.

The High Street chemists producing their own dentifrices, each having ambitions of their  toothpaste being the most popular, engaged in cut throat competition. This is one of the main reasons why so many different toothpastes were created and with such a degree of artistic expression, which would further entice consumers solely by the pot's aesthetic appeal.


(I would have bought this one, my favorite..."Viola Paste") 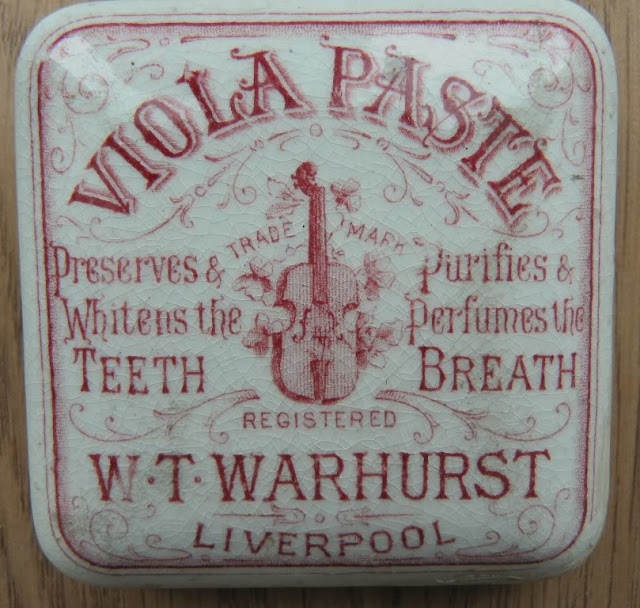 Some pot lids were decorated with cherries or cherry blossom - even though there was no cherry flavoring added, instead just a bit of color.  Adding color to the paste allowed further romantic descriptions to boost sales.   Toothpastes named White Rose, Coral, Tomato, Carnation, Damask Rose and others were created. Areca Nut without any coloring could easily have been called White Cherry.  Some toothpastes had names which would seem strange today - including carbolic, antiseptic and ozonized toothpaste. 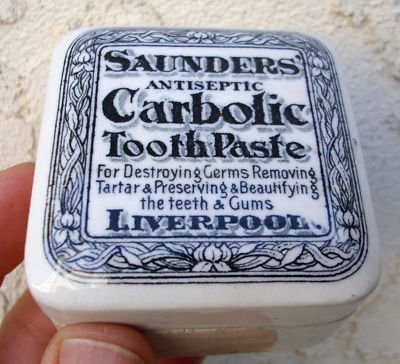 This 'ozonized paste' pot lid has a purple transfer and that with it being rectangle shaped make it ultra rare and desirable among collectors.  It just sold for nearly $300. 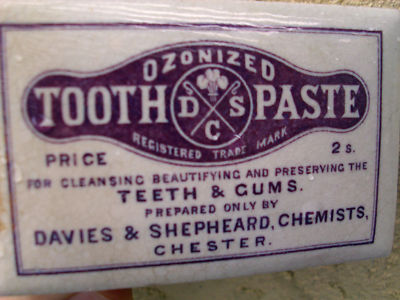 After 1910 the decline in the  number and varieties of toothpaste being manufactured by High Street chemists was seen.  After the first world war, there were few chemists  left selling toothpaste in the small printed pots.
c1890-1910 square 'White Rose Paste' Pot Lid from 'S.Maw, Son & Sons, London' still retains 99.9% of its original gold band 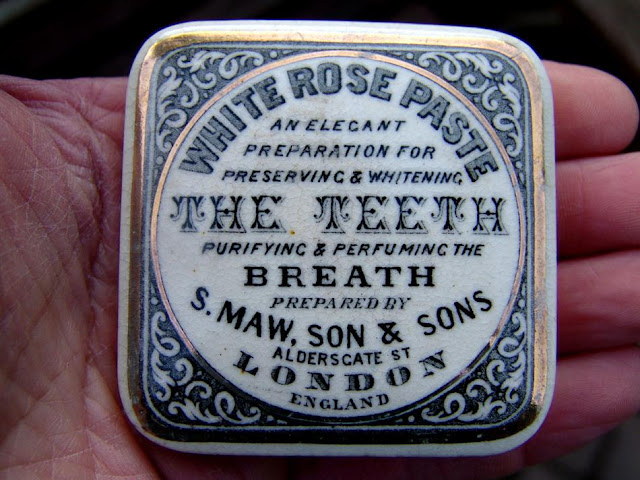 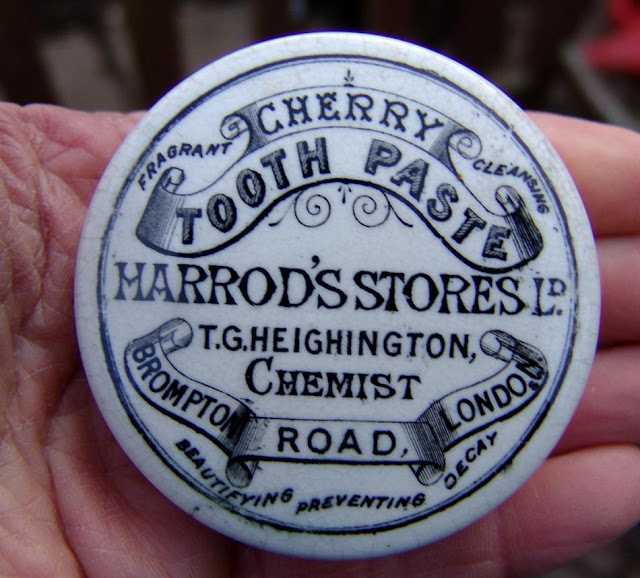 The Indian areca or betel-nut and the cherry were popular subjects for the designers of  toothpaste lids. Some areca nut lids also carried illustrations of Indian buildings or mosques and palm trees. 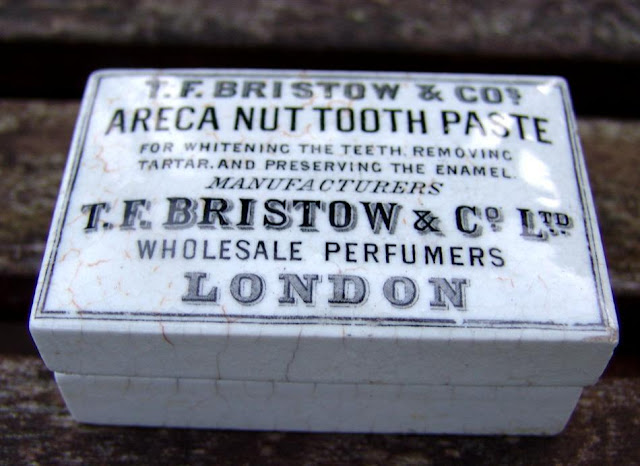 The International Agency for Research on Cancer regards the chewing of betel and areca nut to be a known human carcinogen...needless to say, pharmaceuticals are not making this tooth powder anymore.  Here's an interesting article from Oxford's Journal of the History of Medicine  regarding the unearthing of many of the pots that had contained areca nut powders and pastes and the effects of such on the teeth.
http://jhmas.oxfordjournals.org/content/39/1/65.full.pdf 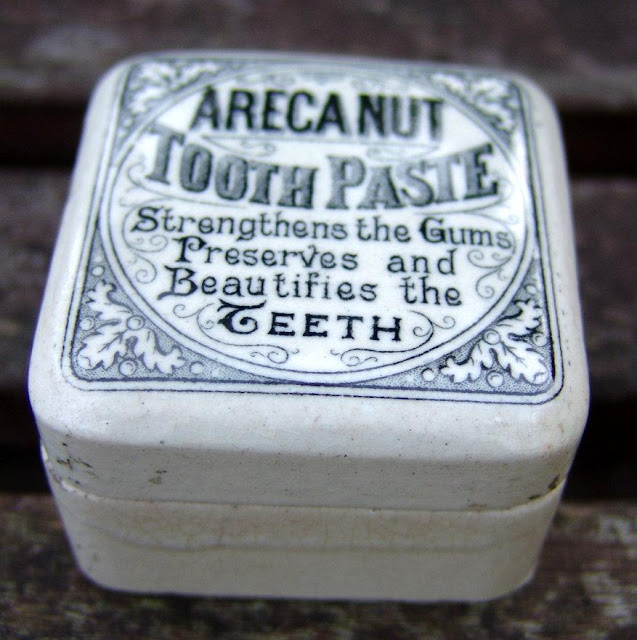 c1890-1910 'Tooth Paste' Pot Lid from Vinolia & Co. Ltd., London has an elaborate cartouche with the printing inside...unusual and rare to find in red print 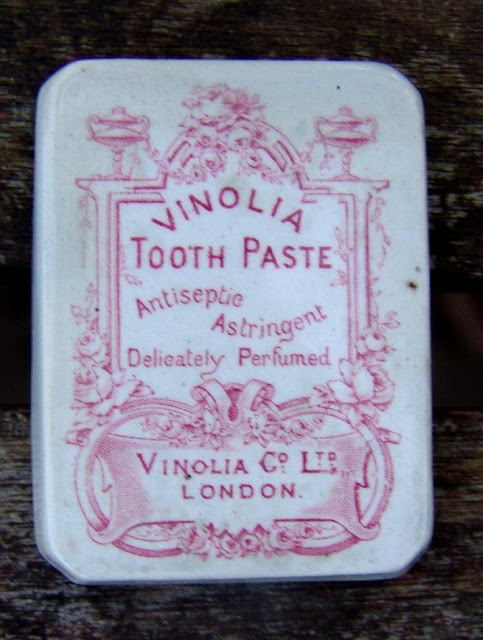 Below, a c1890-1910 Cherry Tooth Paste Pot Lid from 'F.J. Sykes, Colwyn Bay' (in North Wales, UK)  Very rare, green transfer print.  The name is a little misleading being called Cherry, implying that cherries are, or cherry flavor is added to the blend.  Areca Nut and Cherry Toothpaste were made from the same formula.  Cherry toothpaste became red or pink by the addition of carmine but no cherry flavoring was added.  The word cherry, refers to the color of the paste only. 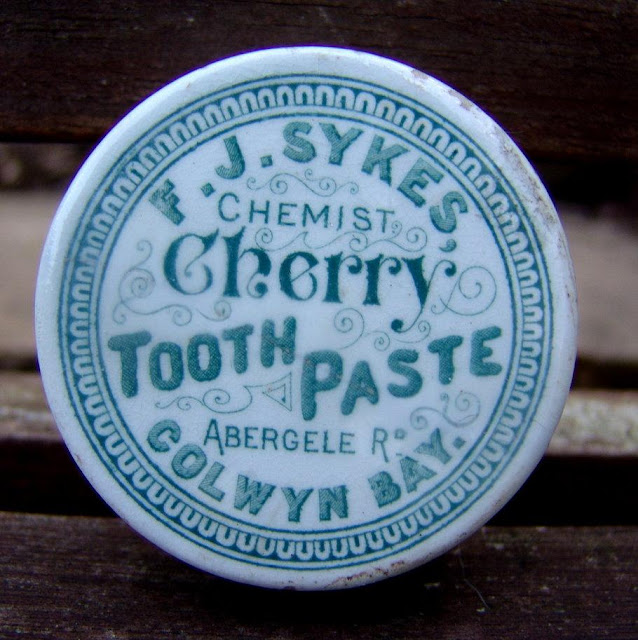 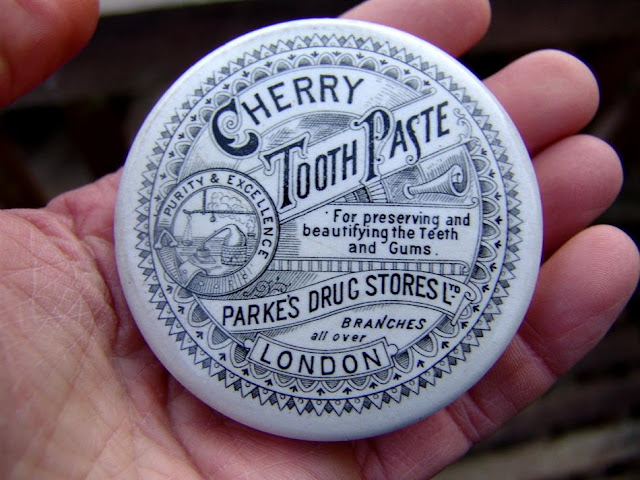 Circa 1880, This Canadian toothpaste "Imparts A Delightful Fragrance To The Breath" 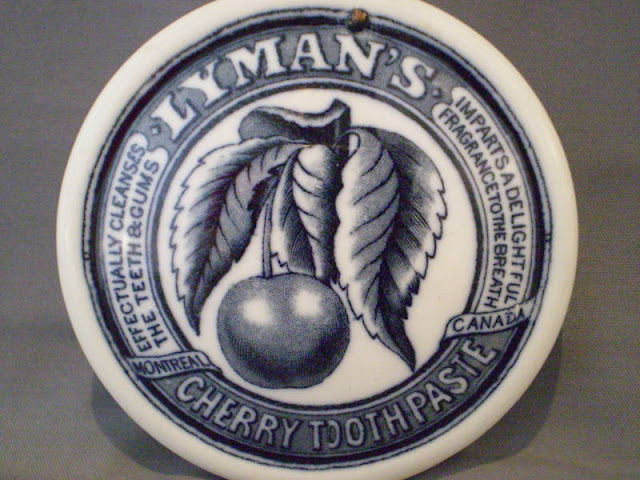 John Gosnell & Co Ltd's Cherry Tooth Paste in a polychrome transfer: it's good enough for the Queen.  This firm made several pot lids with 'royal' themes and images. 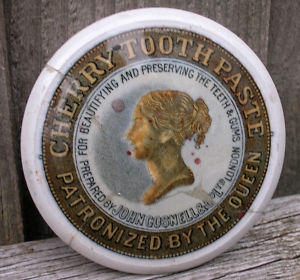 Here is one of the most unusual of pot lids with its triangular shape. 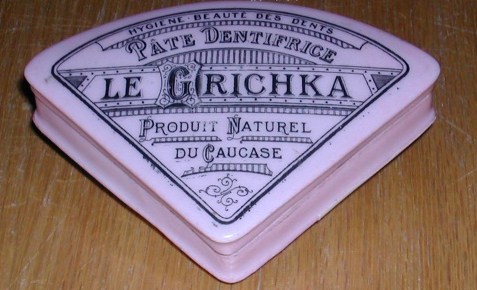 Pot Lids are highly sought, and usually valuable, collectibles.  Today, they are still being unearthed in dump digs around the UK.  It is believed that about 5,000 different pot lids were produced worldwide.  Pot lids sell anywhere from $15 up to $500 and sometimes more.  One of the rarest pot lids, having a bear motif', sold for $10,000!  You can find them on auction sites and in antique stores.  They are really cute and make great conversation pieces and decorative items...which I'll show in an upcoming post.