August 16, 2011
A couple of weeks back I posted about advertising on transferware.  I mentioned my French mustard pot and thought I'd show it to you especially since everything and anything 'French' is so in right now.  It is the real deal...dug from an old dump site in England and shipped to me.   It dates to the early 1900's.  It cost me $12 including shipping!  Some of these old transfer printed pieces, called advertising wares, are very collectible and often quite expensive.  I know I got a good deal. 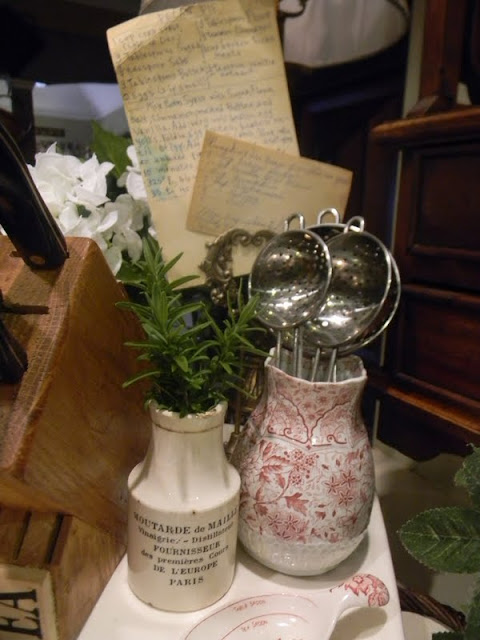 I have it displayed on my cheese slab along with an Aesthetic movement vase, a transferware measuring spoon and our knife block.  I cut some fresh Rosemary and tucked it inside. 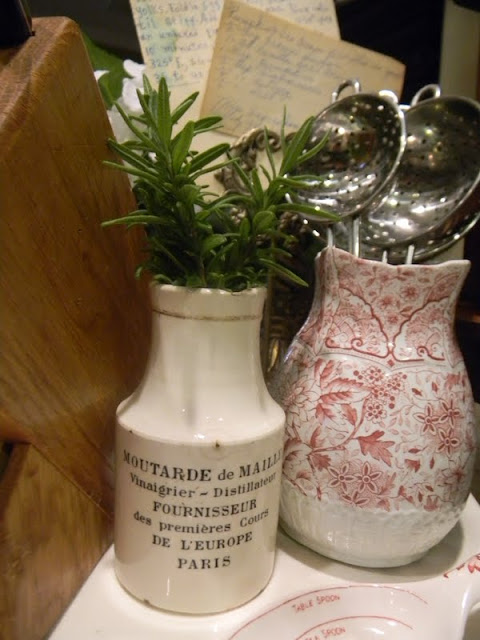 I generally collect only English transferware.   This is the second piece of French transferware I've had.  I have one German piece.  I suppose I am a transferware snob because I collect only vintage or antique pieces.  Did you know that until recent years over 90% of all transferware made was produced in the Staffordshire region of England?    Sadly, since the 1990's almost every English transferware producer / potter  has closed down, gone bankrupt or moved offshore to places like China and Malaysia where the cost of producing wares is so much less expensive.  Just as sad is the fact that the way the wares are made is not the same that it once was.  The materials used to make transferware are not the same as the clays found in the Staffordshire region...one of the reasons this area was so famous and known the world over as 'The Potteries'.  The transfer printing process is also different as it is a more mechanized production, sometimes the transfer is actually a rubberized stamp.   Where copper plates were once hand engraved by skilled engravers who often took several months to complete a plate,  the plates are now machine etched into steel.  One of the things that has always drawn me to old transferware is that it is such a fantastic story, one of the greatest ever, of mass production.  Yet still the process required so much hand detail that it, to me, was a beautiful marriage of mass production and hand made.
Ok...sorry...got off subject a little didn't I?  Back to the French Mustard Pot.    Below is the Sarreguemines stamp on the bottom of the pot.  Sarreguemines is more well known for their Majolica. 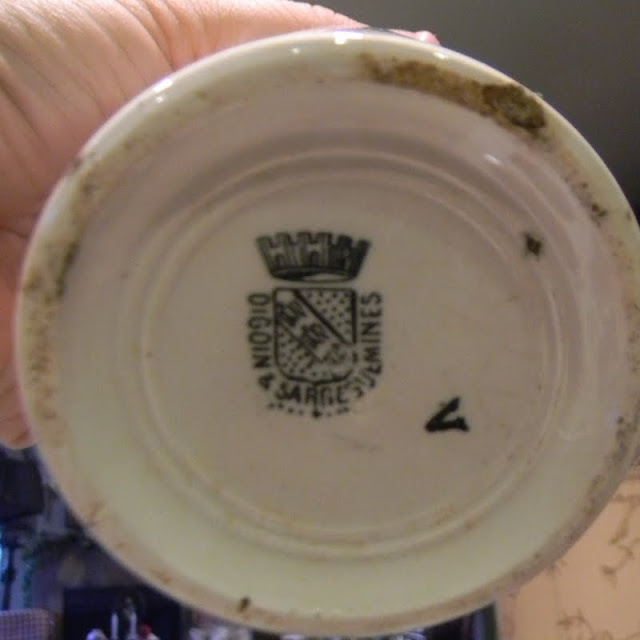 You can see a few of the other pieces I have on the shelf to the right.  I plan to do a post on this sometime and show some of the other advertsing transferware pieces I've been fortunate enough to find at a price I can afford.

All of my photos look blurry to me...and I'm hoping it is just me.  I haven't posted in a few days because my computer crashed and I am working on Shawn's itty bitty freebie computer with a teeny tiny screen and I can barely see anything!  Of course it would happen that my computer would go on the fritz the one and only time ever that I had photos for several posts!  Hopefully it will be back from the computer hospital and working soon. In the mean time, my back, shoulders and neck are quite stiff and sore  due to me hunching over and having my eyeballs  an inch away from the screen for the past hour or so!
Blogging is so worth it!
Until next time I'm joining...