I just finished making some more topiaries with various transferware   items for my online store and thought I'd show some of them to you all.  I think I'm going to post a tutorial on making these but I am going to need someone to help take the photos.  I took pictures while I was making these but some or most of them didn't turn out very good.  Holding a hot glue in one hand while attempting to glue moss in place and holding a camera in the other hand while trying to take a photo of me trying to glue moss in place proved not to be the best idea I've ever had...and I am left with burn marks to prove it.  So, the tutorial will have to wait until I have someone at home to take pictures of the process. 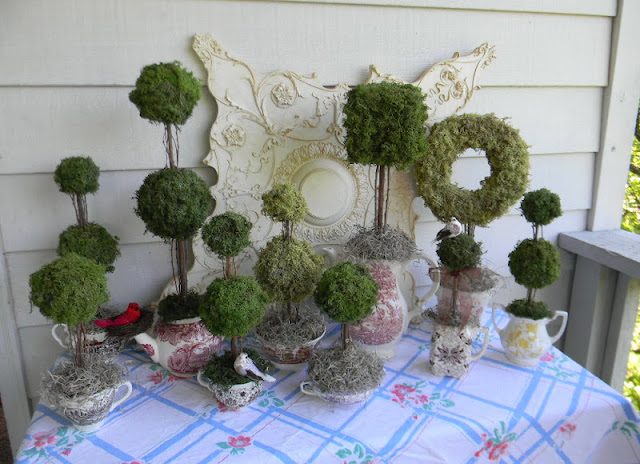 This Mason's Vista teapot has a chip on the spout so I've camoflauged it by adding a birds nest and a cardinal.  I think this is one of my favorite topiaries that I've made thus far.  Kalyn and Ashton told me I should keep it.  I have to admit that I'm tempted and I kept envisioning it on my hutch that I posted about yesterday. 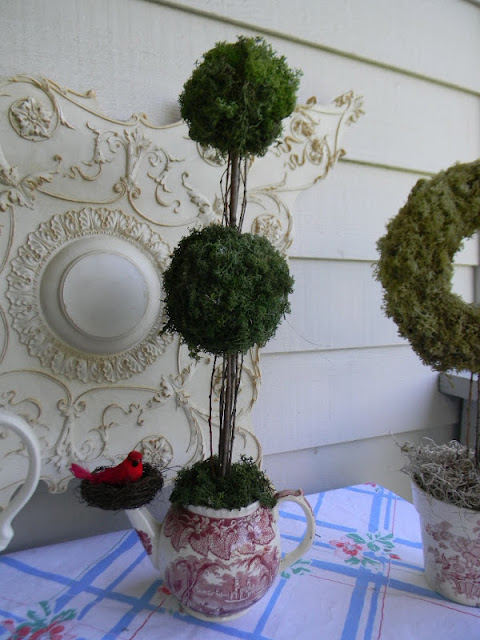 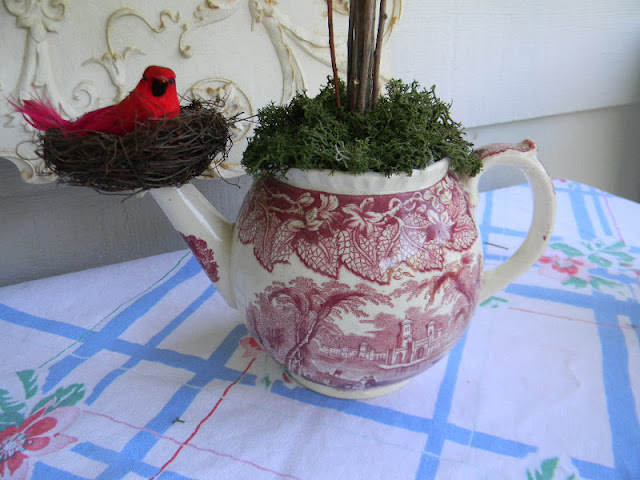 I have sold quite a few of these and had several custom orders since the last time I showed a group of them in this tablescape.  I had one order for a bunch of tea cup topiaries that were used in an Alice In Wonderland themed wedding.  I hope she sends me pictures. 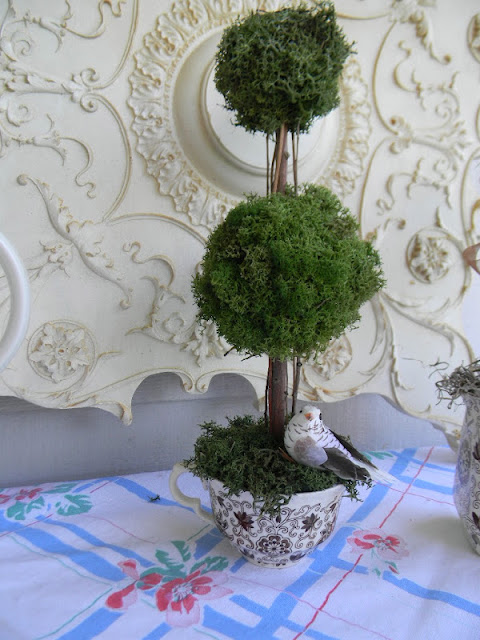 When I posted this table below I mentioned that the plates were already sold and would be shipping out to my client soon after I'd shot the table. 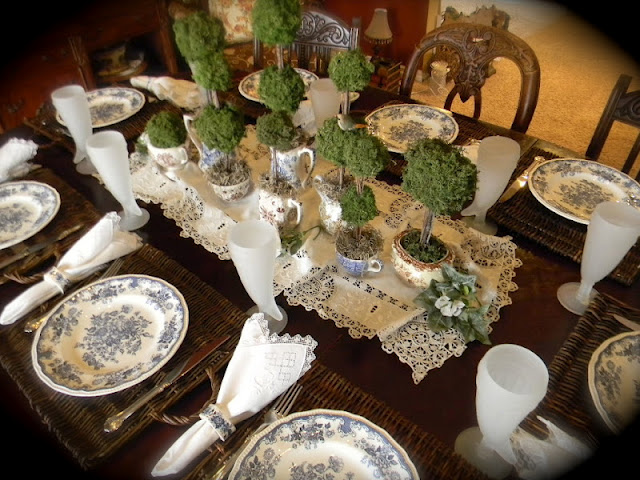 She just purchased a couple of pieces and had me convert the pitcher she bought into a topiary.  It matches the bowl beside it. 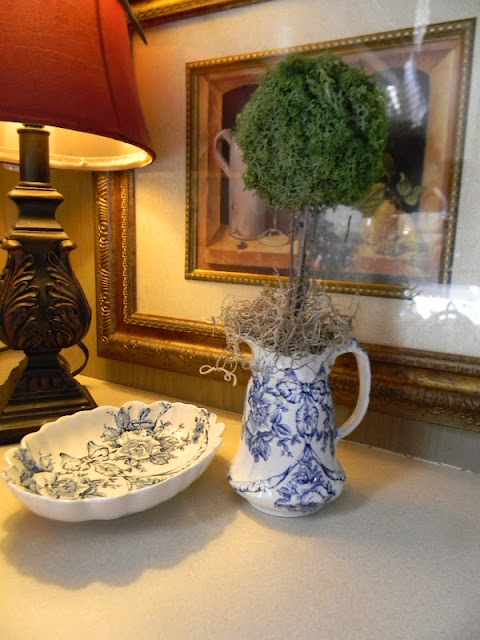 I think these two make a cute couple 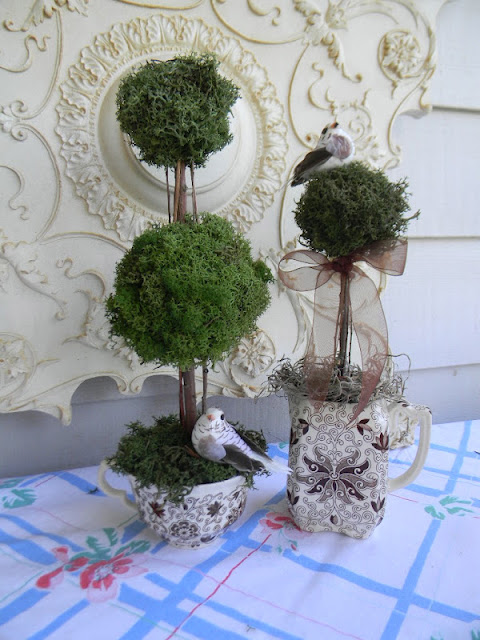 I've also added some new shapes to my topiaries.  I chose a square shape for this coffee pot to compliment the shape of the pot and the base, which are both slightly square with rounded corners. 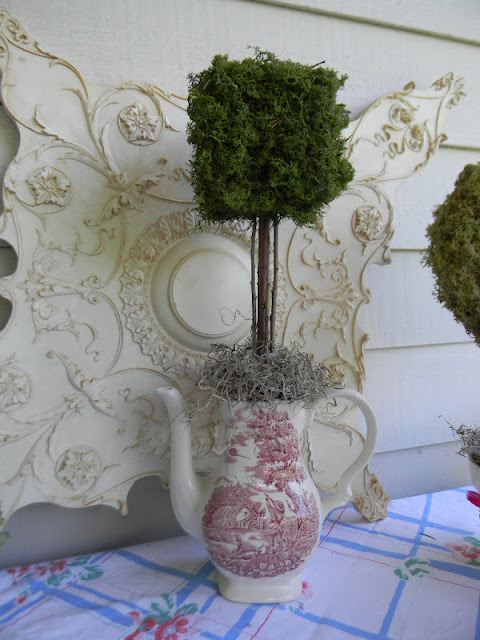 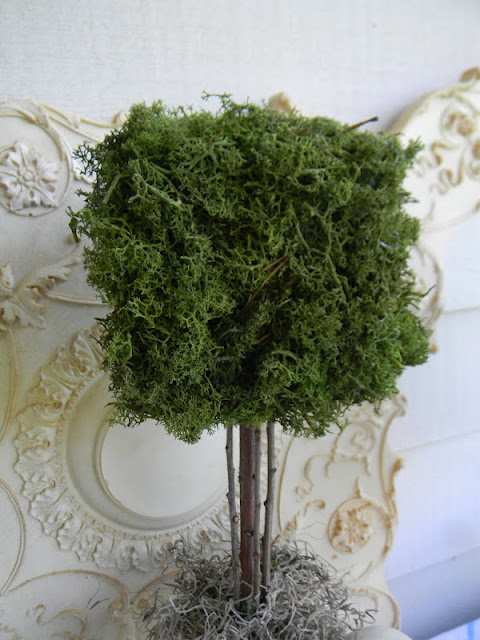 For this cache' pot I used a lighter green moss and a fun wreath shape.  I really liked this one to.  This took a lot of moss to cover though. 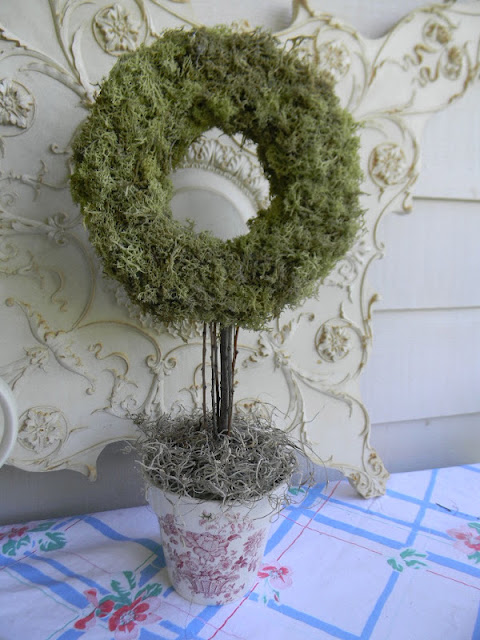 So, what do you think?  Like, dislike?  What's your favorite shape?
I was thinking that I haven't done a giveaway in a while so I might need to do one for one of these.
Hmmmm

Well, I was going to post a few more pics but I got a message from Google saying I've used all my space with a link to buy more space. I did.  I'm still not able to put any more photos on.  Has this happened to anyone else?