Black isn't a color you see mixed with traditonal Autumn colors very often but in the case of these turkey transferware plates by
W. R. Midwinter I think they beckon to be used with amber, brown, gold, and shades of orange or red.   So that's just what I did. 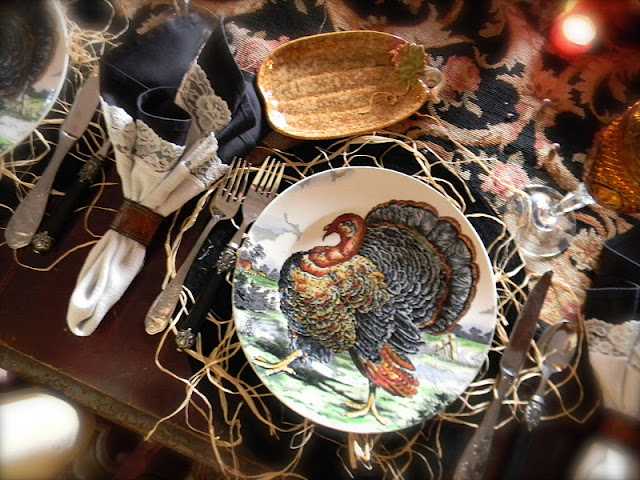 I received so many compliments on the raffia I used in THIS tablescape, that I decided it would be nice to add some under these plates as well.  I did use placemats, however I flipped them over because they are beaded which I felt did not work with the plates...however the felted backs are black and provided an anchor for the plates to really stand out against. 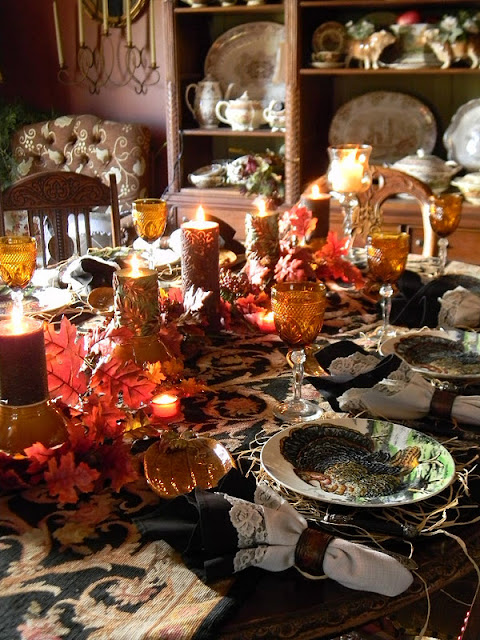 I created a simple centerpiece that runs the length of the table by winding a garland of Fall leaves around several pillar candles.  I tucked a few berries in here and there and interspersed throughout with tealight candles in red glass holders.  This was cheap...about $5 for the garland, and honestly you could  gather real leaves and it would, in my opinion, be even prettier, and cheaper.
I couldn't talk any of my kids into sneaking into the neighbors yard to cut down some of their branches full of turned leaves or I'd have made the centerpiece from them.  Better luck next time.
(Ok...I didn't really try to talk my kids into doing that...I admit the thought did cross my mind...). 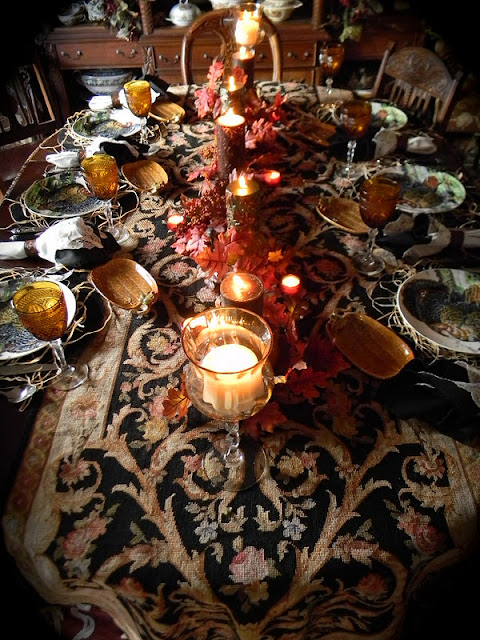 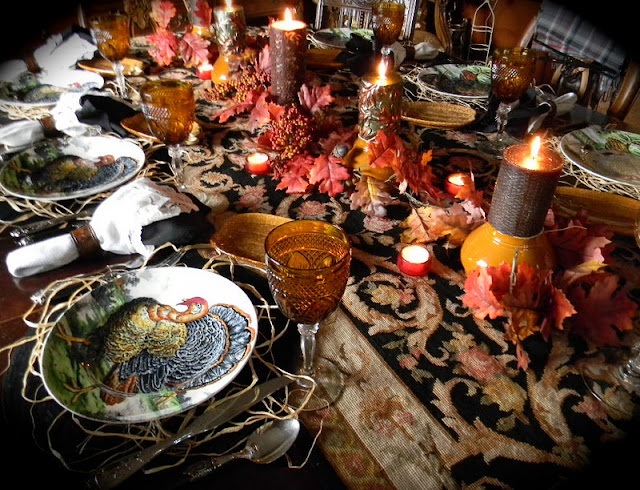 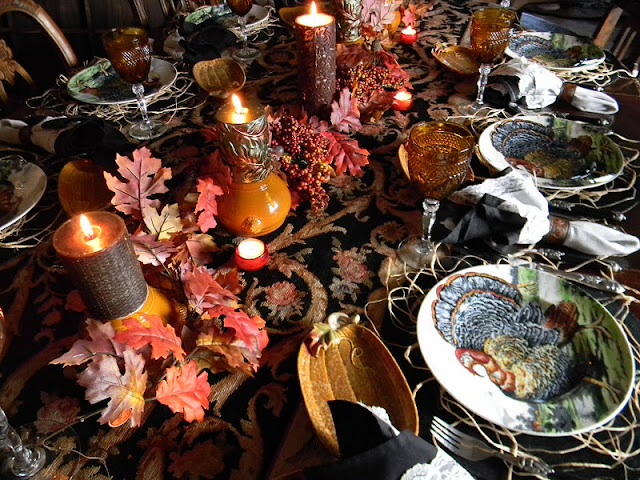 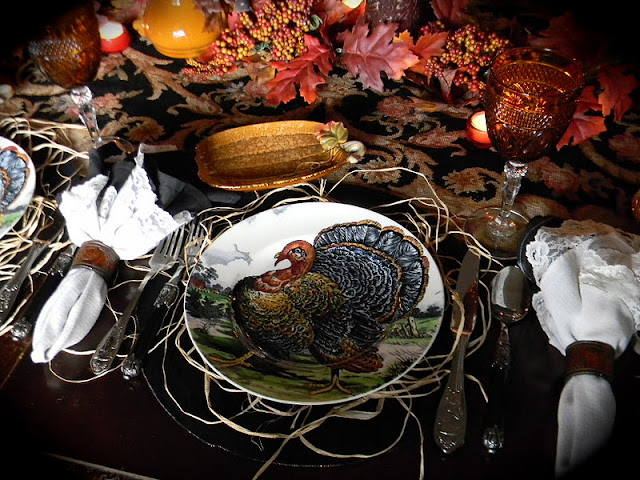 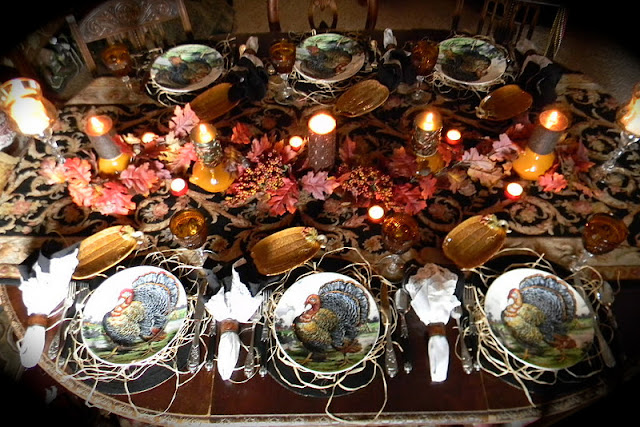 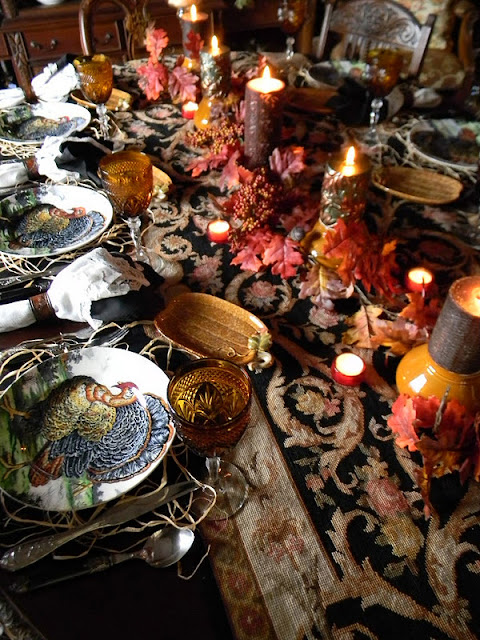 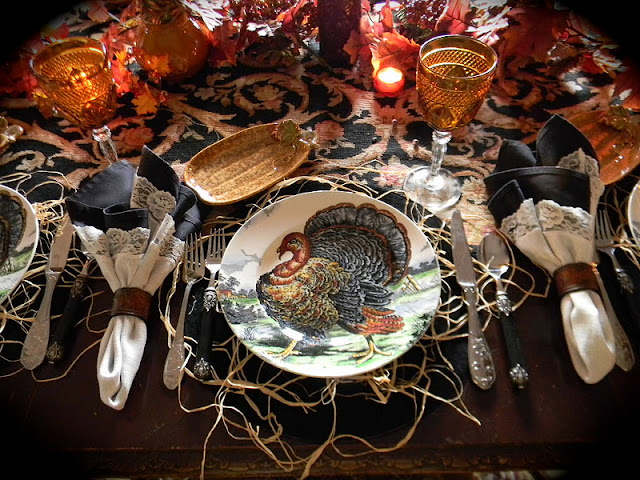 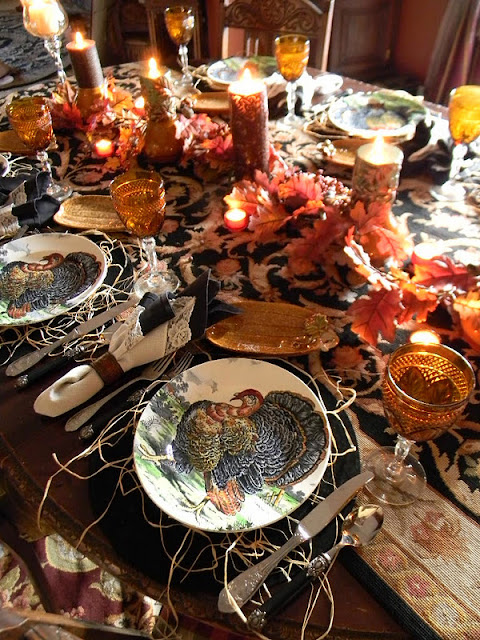 I love these little pumpkin side plates.  They work well with most of my Fall dishes.  I used them last week in my purple and sage tablescape.  These were found at Ross for $2.25 a piece. 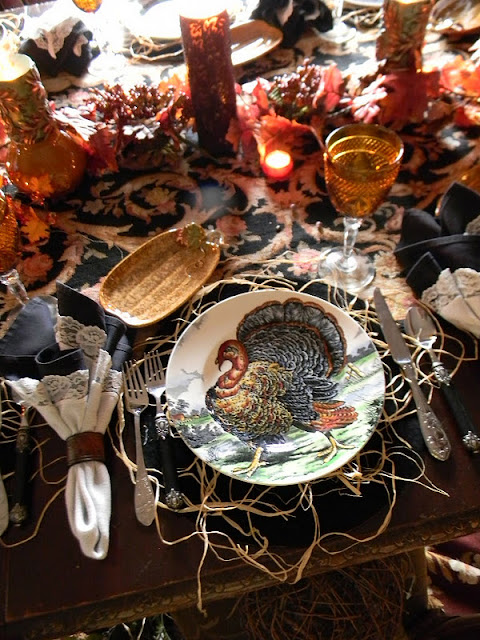 These napkin rings are on clearance at Walmart right now for $2 per set of four.  They're plastique, made to look like tooled leather. 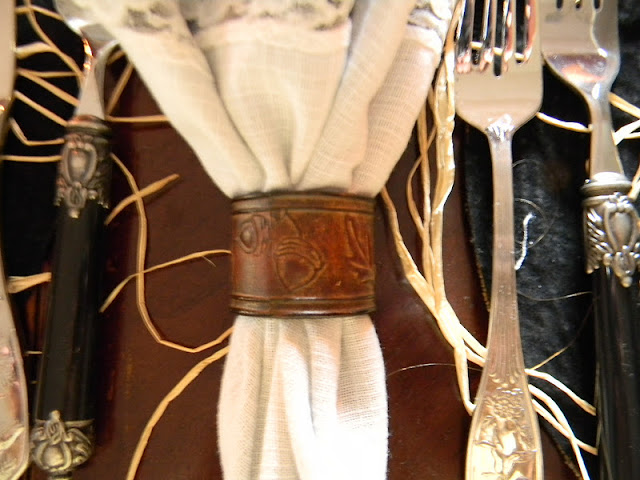 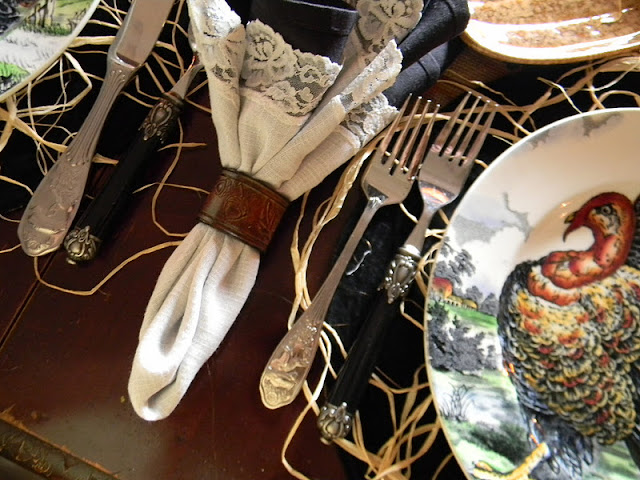 I draped a 14' long needlepoint runner across the table so it hangs almost to the floor on either side.  I love the rich color and texture this adds. 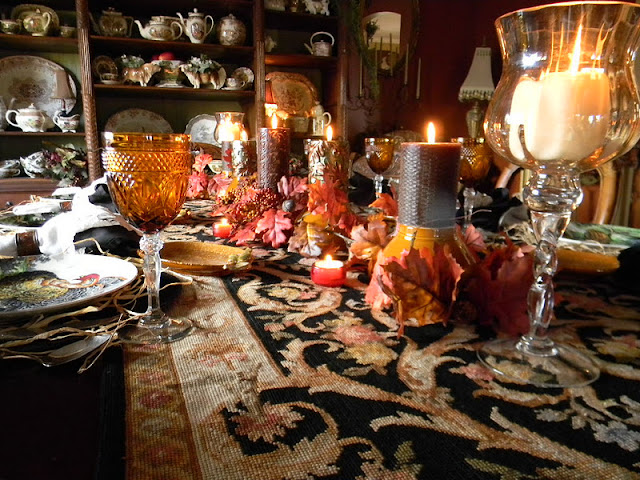 I love these rich colors! 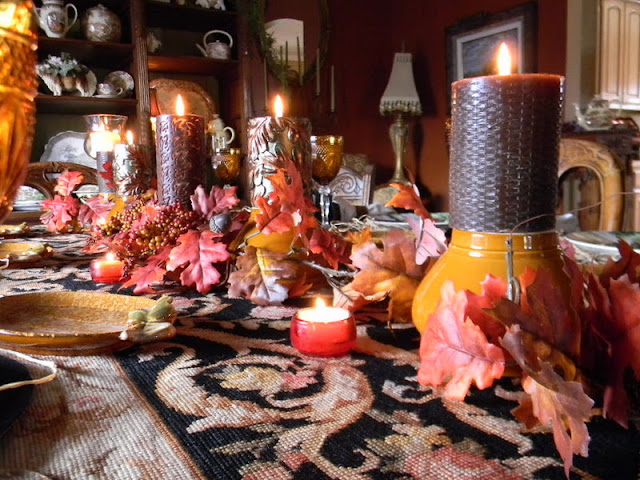 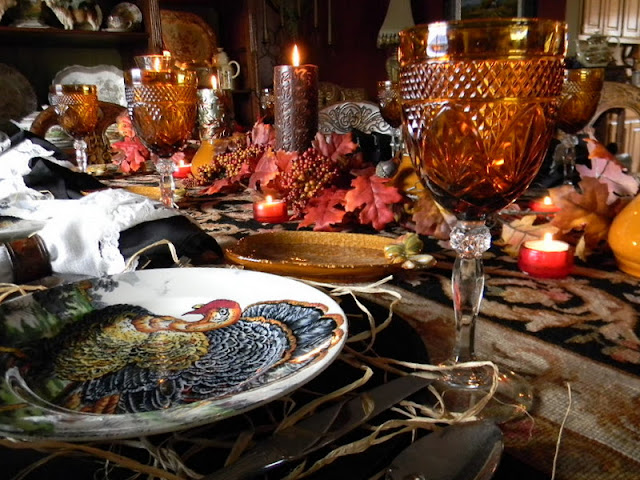 What dishes do you use for Thanksgiving?  Do you have a set just for that special dinner or a set just for Fall?
I have sold lots of sets of salad plates this year that my customers will use with their existing china.  I have two customers who have sea green / Robins Egg blue plates and they each added brown transferware salad plates.  The blue green with brown is a pretty combination. 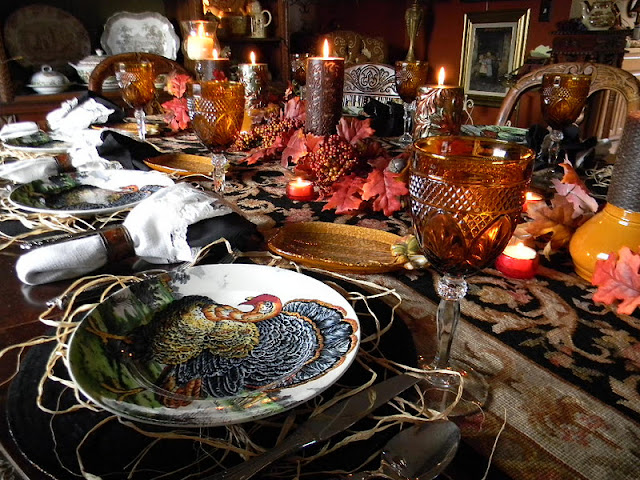 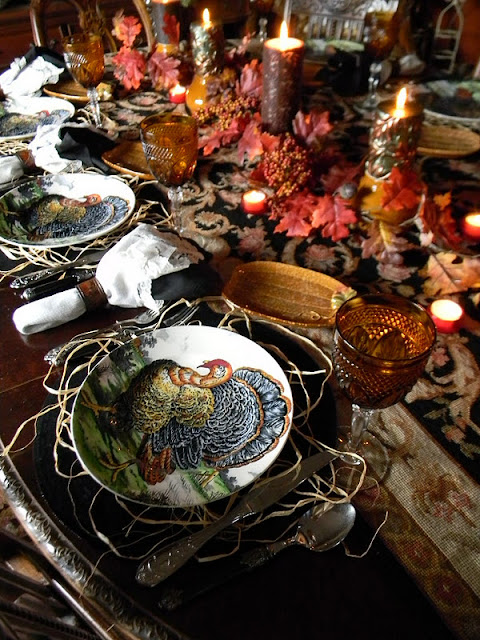 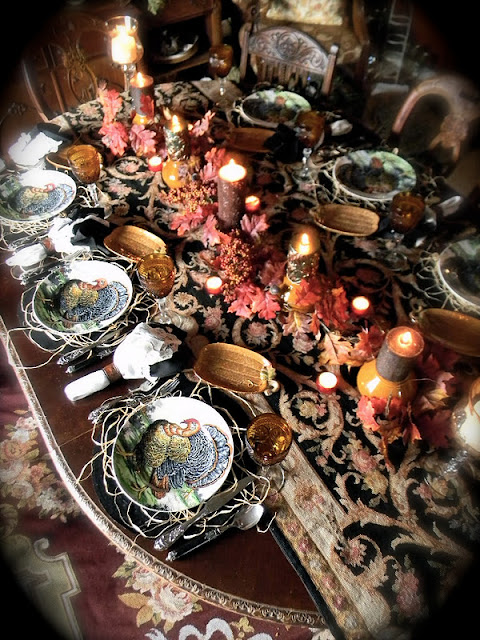 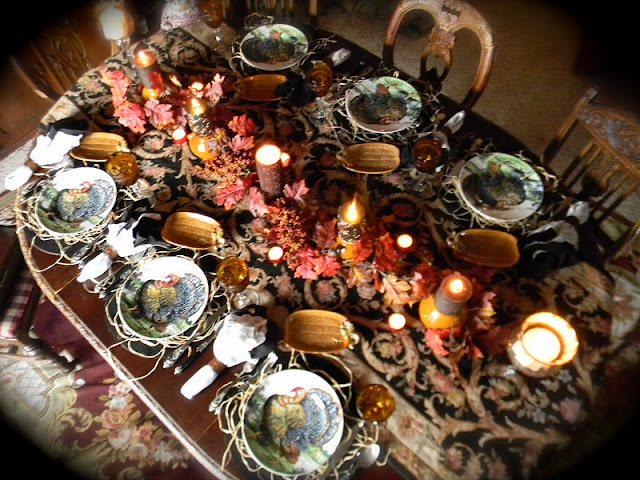 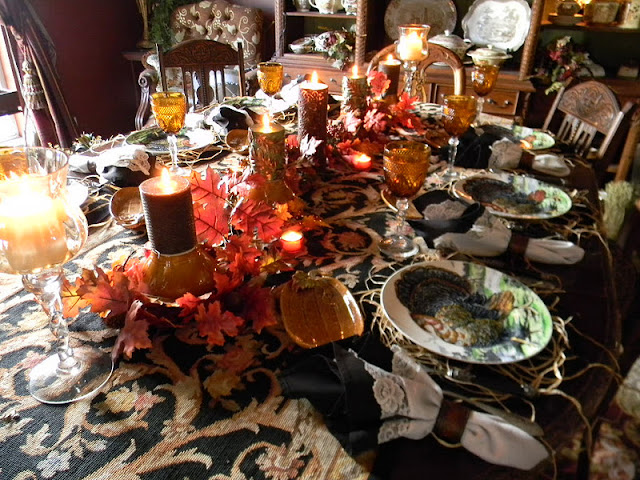 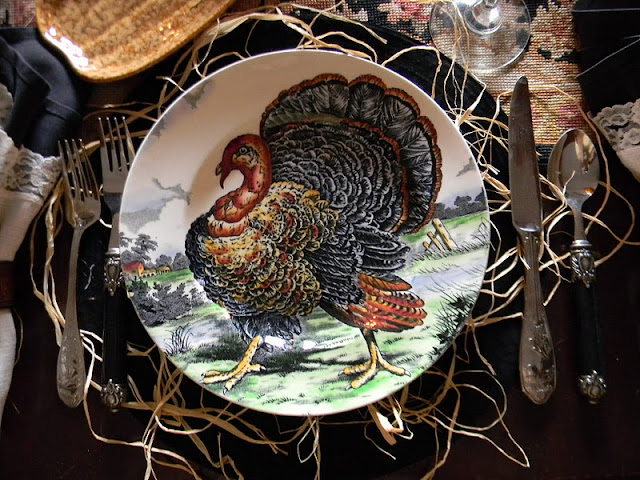 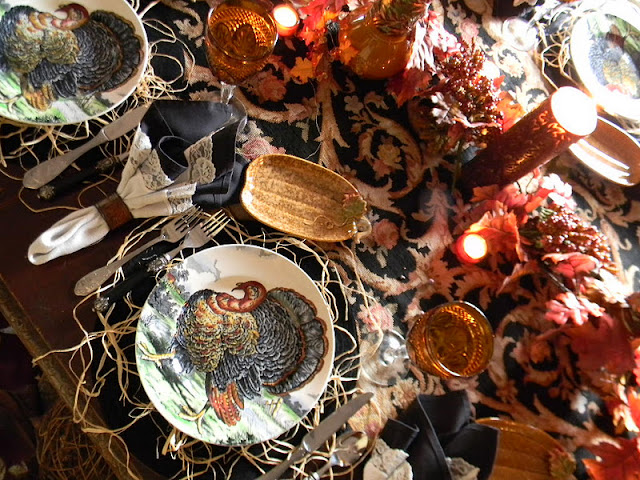 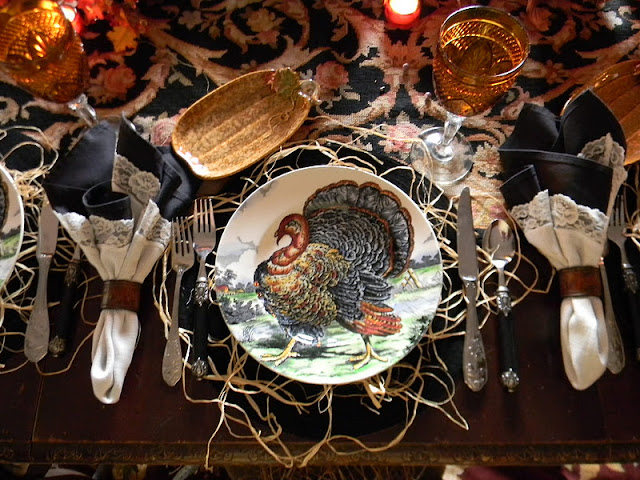 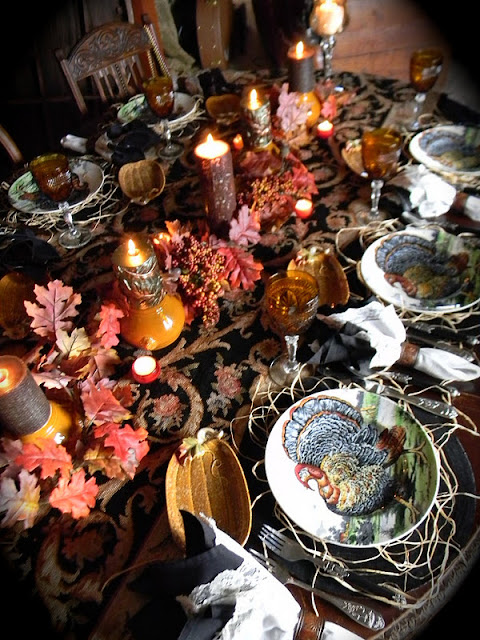 A couple of posts back I shared the history of English turkey themed wares and showed you all this platter, which is the mate to my plates. 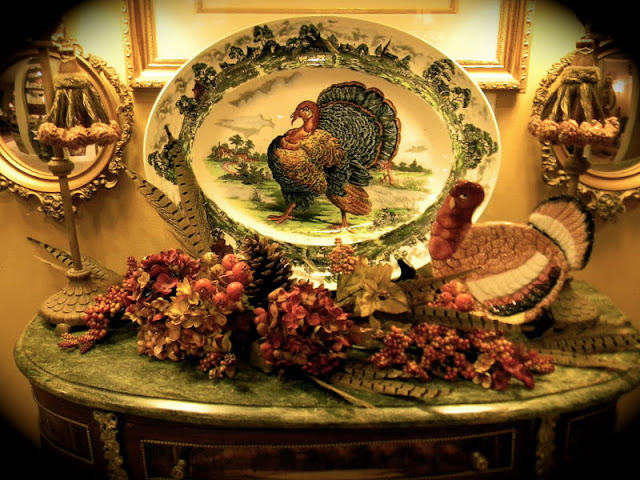 For those of you interested in the history of Midwinter:

W.R. Midwinter was founded by William Robinson (my maiden name!) Midwinter at Bournes Bank, Burslem in 1910.  The business expanded so quickly that by 1914 they relocated to the larger Albion Works, also in Burslem. 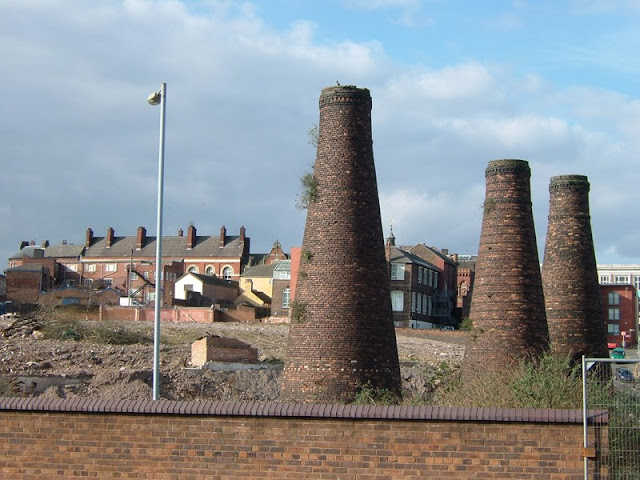 William Midwinter served in the Royal Navy during the First World War and left the care of the business to his wife.  The company continued to grow throughout the 1920's and 30's and incorporated as W. R. Midwinter Ltd in 1932.  At that time, the firm acquired neighboring Hadderidge Pottery and continued production throughout the Second World War, though at a much reduced rate.  Following the end of the war, W. R. Midwinter's son, William Roy joined the business and assumed complete control in the late 1950's. Under the management of William Roy, Midwinter became one of the leading producers of domestic earthenware.  Midwinter made other acquisitions in 1964; A. J. Wilkinson Ltd. and Newport Pottery Co. Ltd.   Only a few short years later the Midwinter potteries were struggling financially and were taken over by J & G Meakin (relatives of Johnson Brothers), and by 1970 Meakin was taken over by Wedgwood.

Midwinter was much less known for the transfer printed wares that I am so fond of, but more for art deco shapes and styles.  Some of their memorable patterns were produced by in-house designers Jessie Tate and Hugh Casson, who's French scene drawings on those wares are now so highly sought.

Roy Midwinter remained on staff through the Wedgwood days until 1981 and then became a designer associated with Federated Potteries Ltd.  He died in 1990.

Best of all is it to preserve everything in a pure, still heart, and let there be for every pulse a thanksgiving, and for every breath a song.
Konrad von Gesner